It’s no secret that the Hollywood Comet loves musicals.
In 2010, I revealed I had seen 400 movie musicals over the course of 10 years. Now that number is over 500. To celebrate and share this musical love, here is my weekly feature about musicals.

Plot:
Set in the late 1800s, every man in town has their eye on beautiful Virginia Brush (Paige), including small town dentist Biff Grimes (Morgan) and his best friend Hugo Barnstead (DeFore).
The two are invited by Viriginia on a double date with her suffragette nurse friend Amy (Malone).Though Amy is sweet and pretty, Biff is unhappy that he is “stuck” with Amy.
Hugo wins over and Virgina and the two marry, and Biff ends up marrying Amy.
A few years later, Hugo and Virginia return to town, and Hugo gets Biff involved in his business. Hugo double-crosses Biff, who has to go to jail. When he gets out, Biff hopes to get revenge on Hugo.

Trivia:
-Version of earlier films “One Sunday Afternoon” (1933) starring Gary Cooper and Fay Wray and “The Strawberry Blonde” (1941) with James Cagney, Olivia DeHavilland and Rita Hayworth.
-All three films are based on the play “One Sunday Afternoon,” which opened in 1933 at the Little Theater in New York and ran more than 300 performances.
-Director Raoul Walsh originally wanted to cast Dane Clark as Biff (Morgan’s role), Eleanor Parker as Virginia (Paige’s role) and Donna Reed as Amy (Malone’s role), according to the book “Raoul Walsh: The True Adventures of Hollywood’s Legendary Director” by Marilyn Ann Moss.
-Walsh also wanted to cast Virginia Mayo as Virginia, but Warner cast Paige instead, angering Walsh, according to Moss’s book.
-Doris Day tested for the role of Amy, according to Moss’s book.
-Dorothy Malone is dubbed by Marion Morgan. 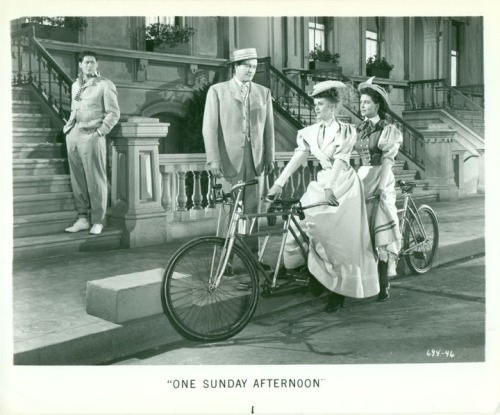 Hugo and Biff go on a bikeride with Virginia and Amy in “One Sunday Afternoon” (1948).

My Review:
For better or worse, I can now say I have seen every film version of “One Sunday Afternoon” (okay, except for a 1959 TV special starring Janet Blair and David Wayne.)
Of the 1933 version starring Gary Cooper, the 1941 version starring James Cagney and this one- I would rank “One Sunday Afternoon” (1948) as the least enjoyable of the three films.
“The Strawberry Blonde” (1941) would be my favorite. It has it all: an excellent cast including Cagney, Jack Carson, Rita Hayworth and Olivia de Havilland; charm; humor and the end even includes a sing-a-long of “The Band Plays On.”
“The Strawberry Blonde” was one of Warner Brother’s top hits of 1941 and director Raoul Walsh considered it one of his favorite films.
When Walsh was assigned the musical remake of his favorite film, he was uncertain, according to Marilyn Ann Moss’s book on Walsh.
Walsh felt Warner Brothers was getting a reputation for remakes and Warner continued cutting costs on the 1948 film, with is probably partially why top actresses like Virginia Mayo and Eleanor Parker were not cast, according to Moss’s book. 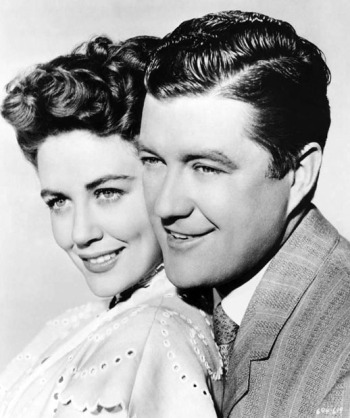 Publicity photo of Dorothy Malone and Dennis Morgan for “One Sunday Afternoon.”

Though filming went smoothly, it wasn’t the same happy experience for Walsh as he had with Cagney, Hayworth, Carson and De Havilland, Moss wrote.
For me, it’s another case of the impossible task of trying to improve on perfection. With such a fun story, the 1948 version of “One Sunday Afternoon” is lackluster compared to the other two. I feel the cast and the addition of forgettable music contributed to this being a dud.
Dennis Morgan, who I love, couldn’t even save this film with his smooth singing voice and good looks as leading man Biff Grimes.
Don DeFore is fine as the heel Hugo Barnstead, but it would have been fun to see Dennis Morgan with his frequent co-star Jack Carson. Carson would have been reprising his role from “The Strawberry Blonde.”
I like Janis Paige as an actress, and she had the right amount of sex appeal and sass for the role of Virginia, but I felt like something was lacking.
Dorothy Malone (still a brunette) seemed like the only person trying to develop her character and was sweet and adorable (this was before she became a Hollywood sex pot) but just wasn’t quite as appealing as Olivia De Havilland in the role.
Walking away from the film, I couldn’t tell you anything about any of the songs, because they were that forgettable. Dennis Morgan sang an Irish song, which shouldn’t be surprising for anyone who has watched several Morgan films.
I don’t mean to be so negative about the musical remake of “One Sunday Afternoon.”
When I rewatched this film, I was positive I had seen it before. But then remembered I stopped it half way two times prior to viewing over the years because I thought it was so dumb.
Maybe if I saw this version before the other two, it would have ranked higher in my book. I also feel with stronger leading ladies previously mentioned in the trivia such as Donna Reed, Eleanor Parker or Virgina Mayo could have been a much better film.
However, it just doesn’t cut the mustard for me in the way of entertainment.