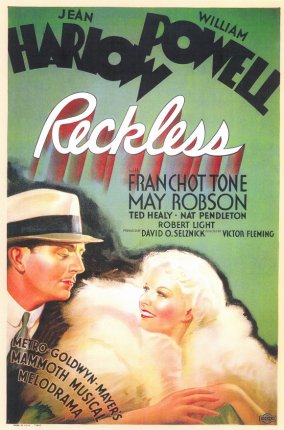 Plot:
Musical actress Mona Leslie (Harlow) goes on stage thinking she’s performing for a charity event to find the whole house bought out by heir Bob Harrison (Tone).  Mona falls in love with Bob as he is courting her, and her gambling agent Ned Riley (Powell) sits silently in the background, though he is also in love with Mona. After a drunken evening, Bob and Mona marry and they face the disapproval of Bob’s wealthy society family.

Hungover Franchot Tone isn’t too sure about his marriage to Jean Harlow in “Reckless.”

-The film was originally supposed to star Joan Crawford under the title “A Woman Called Cheap.” However, producer David O. Selznick replaced Crawford with Harlow before production to capitalize off of Harlow and Powell’s real-life romance, according to the Darrell Rooney and Mark Vieira book “Harlow in Hollywood: The Blonde Bombshell in the Glamour Capital, 1928-1937.”
-Dancer Betty Halsey doubled for Jean Harlow in the long shots.
-The film’s plot was very similar to a scandal that occurred two years earlier involving singer Libby Holman and her husband tobacco heir Zachary Reynolds. Similarly to the film, Reynolds drunkenly committed suicide. Holman threatened to sue for libel, but never did. Harlow was also uncomfortable, because the scandal in the movie was similar to the death of her husband Paul Bern. However, Powell convinced her to make the film, according to “Harlow in Hollywood.”
-Version of “Sing, Sinner, Sing” (1933) starring Leila Hyams and “Brief Moment” (1933) starring Carole Lombard.
-Jean Harlow’s singing was dubbed by Virginia Verrill. “She (Jean) realized that I couldn’t have credit for my singing, so she went out of her way to give me a hand whenever she could.”
-“Reckless” was the first Jean Harlow film to lose money.

Review:
I guess calling this a musical is a stretch. It’s really a melodrama with three or four songs and dances built into the plot, and none of the songs move the plot along.
However, since it is categorized as a musical, the “That’s Entertainment” documentary features it and it’s Jean Harlow birthday, I decided to highlight the film today.
“Reckless” may be the first Jean Harlow film to lose money, but I don’t think it’s un-watchable. It’s interesting, it kept my attention, the plot keeps moving, but I will say it isn’t Jean Harlow’s best film.
The film is interesting however, since it is shot around the time William Powell and Jean Harlow started their romance.
You also see Rosalind Russell early in her career, though she is not the comedic Russell we are used to seeing. Early in her career, Russell is cast as the other woman or the forgiving, jilted friend- such as in “Evelyn Prentiss,” “China Seas” and “Man-Proof.” Certainly not the comedic lady we later came to know.
Also keep your eyes peeled for a young, line-less and un-credited Leon Ames as he marries Russell.
If you are looking for a musical with show stopping numbers, this isn’t it. But if you enjoy a good MGM melodrama with a few songs sprinkled in starring the original platinum blond, check it out. 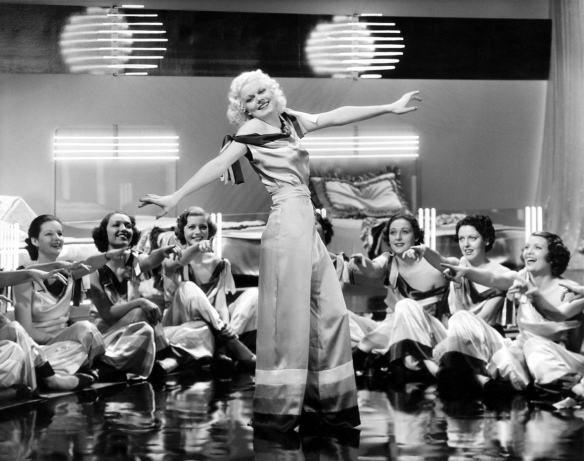