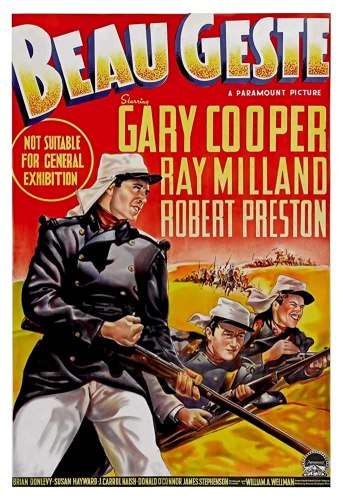 Plot:
Three brothers Beau Geste (O’Connor/Cooper), Digby Geste (Spellman/Preston) and Michael Geste (Cook/Milland) were orphans, adopted and raised by their aunt Lady Patricia Brandon (Thatcher). Lady Brandon also raises her nephew bratty (Holt/Huntley) and her ward Isobel (Gillis/Hayward). Augustus Part of the Brandon family fortune is a large sapphire, the Blue Water. Lady Brandon is going to have to sell the Blue Water to give money to her absent husband. But before it could be sold, one of the young adults steals the Blue Water. Beau and Digby both leave that same night to join the French Foreign Legion, and upon discovering, Michael follows his brothers to Algeria. There the brothers and the rest of the legionnaires suffer under the sadistic and abusive Sergeant Markoff (Donlevy). Markoff targets the brothers after Markoff’s stooge Rasinoff (Naish) overhears the brothers talking about the sapphire.