Plot:
Set in the early 1900s, the Wonder Circus is run by Pop Wonder (Durante) and his daughter Kitty (Day) with their main attraction Jumbo the Elephant. The circus is floundering financially and unpaid performers are quitting left and right to join other shows. Kitty hires a drifter Sam (Boyd) who does odd jobs and various performances. Kitty falls for Sam, but does Sam have the circus’s best interest in mind?

My review:
I will watch any film that includes:
1. Doris Day
2. Circus themes
And “Jumbo” has both of those features that would pull me into the film. The first time I saw this movie in 2003 at the dawn of my Doris Day love, I don’t remember particularly loving this movie. Revisiting it more than 10 years later, I enjoyed it for the most part but it does have its flaws.

Shot in gorgeous in Metrocolor, the movie is visually pleasing with circus costumes, big tops and Doris’s long blond (wig) hair. The Richard Rogers and Lorenz Hart written music also helps. “This Can’t Be Love,” “My Romance” and “Over and Over Again” are lovely and enjoyable songs.

“Jumbo” starts off as incredibly enjoyable. The ending leaves me a little deflated, not because it’s sad, but because the last eight minutes is a ridiculous long rendition of “Saw Dust, Spangles and Dreams.” This is complete with the lead cast (including Stephen Boyd) doing a clown act and Boyd is even a lion tamer.

Jimmy Durante is, as always, humorous and adorable. And because he always seems so sweet, your heart breaks with him at the thought of potentially losing his circus and beloved elephant Jumbo. I also love that Durante was in the original 1935 Broadway show, as well as this film.

In some films, Martha Raye’s prescience can be a bit much for me, but I enjoy her role in this movie. She’s funny and she and Doris Day perform a lovely duet. I’m not positive how they got along offset, but they make a charming set of female friends in this movie.

As for our star: With all of her films, Doris Day shines in this movie. Though it’s obviously a wig, her long turn-of-the-century hairstyle looks nice on her and her costumes are colorful. She makes an energetic, joyful and fun circus performer. The only issue is I can’t help but feel that this movie would have been more effective 10 years earlier when Day was under contract with Warner Brother’s.

While “Jumbo” is fun, I just feel that it’s a 1952 movie musical trying to fit in 1962. By 1962, movie musicals were starting to decline. They were also taking a more serious tone, such as “West Side Story” (1961), which looked at racism and gang violence. “Jumbo” producer Joe Pasternak produced many of MGM’s Technicolor extravaganzas in the 1940s and 1950s, such as “Thrill of Romance” (1944) starring Esther Williams, “Anchors Away” (1945) starring Frank Sinatra and Gene Kelly, and “In the Good Old Summertime” (1949) starring Judy Garland. Even he knew that “Jumbo” didn’t fit in anymore.

The film rights to the 1935 Broadway play were purchased by MGM in 1943, to co-star Judy Garland, Mickey Rooney, Wallace Beery and Frank Morgan. Later in 1947, it was set to star Garland or Kathryn Grayson with Frank Sinatra. And again, in 1952, Debbie Reynolds, Red Skelton, and Donald O’Connor were to be in the film, according to the book “Charles Walters: The Director Who Made Hollywood Dance” by Brent Phillips.

I can picture this film with any of the above listed in the time frame they were originally considered. Doris Day, Durante and Raye would have been even better in this film in 1952. Maybe Gordon MacRea could have played the leading man. 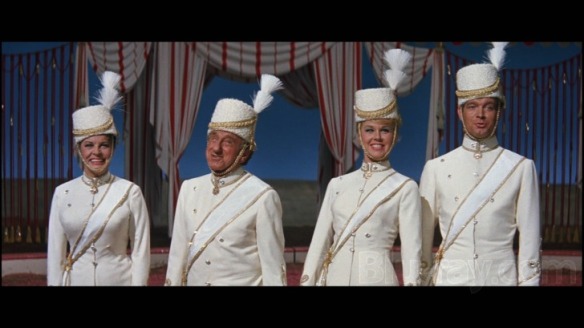 Another flaw was casting actor Stephen Boyd as the leading man. I love Stephen Boyd (and I had a major crush on him after first seeing this film) and I think he’s a great actor. However, Boyd doesn’t fit in a musical. This just doesn’t seem his style and he ended up being dubbed.

Director Charles Walters said Boyd worked hard on the film but wasn’t right for the film. Walters did say Boyd had a good sense of humor on set, which I was happy to hear. However, instead of Boyd, Walters wanted Richard Burton instead, which would not have been better than Boyd. 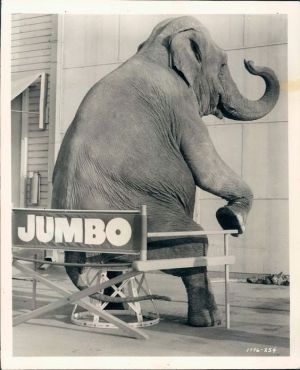 The only lead star in this film that didn’t receive enough screen time was the film’s namesake: Jumbo, played by Syd the elephant. For a film named after the elephant’s character, Syd probably only was on screen for 15 minutes of the 126 film.

For a movie about Jumbo, you see very little of the elephant, but his scenes are enjoyable. You get to see Jumbo do a few acts and play the tuba. I love elephants, so I particularly enjoyed his scenes.

Though “Billy Rose’s Jumbo” should have been released in theaters at least five years earlier to be relevant to audiences, it still is a fairly enjoyable film.