Though some people find 1940s child actress Margaret O’Brien cute and spunky, I think she is a nuisance. Particularly at Christmas time. 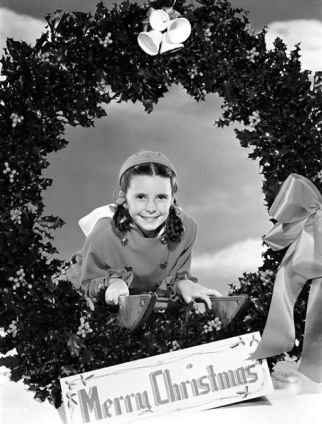 O’Brien can really put a damper on the Christmas season from attacking snowmen to nearly killing her pregnant mother.

Her brattiness particularly shines through in two Christmas films, “Meet Me in St. Louis” (1944) and “Tenth Avenue Angel” (1948):

“Meet Me in St. Louis,” a personal favorite, is simply the story of a family, set in the early 1900s when the World’s Fair is coming to St. Louis. The family has four daughters: Rose (Lucille Bremer), Esther (Judy Garland), Agnes (Joan Carroll) and Tootie (Margaret O’Brien)

Though Garland is the true star of this film, O’Brien steals several scenes by simply being a brat.

I’m fairly convinced that Tootie manipulates her family by being an obnoxious brat and turning on the waterworks in order to get what she wants. 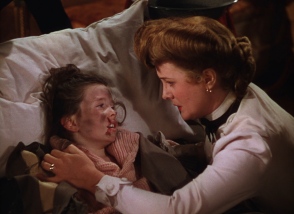 As Tootie telling lies to Mary Astor, O’Brien played her mother-saying that John Truitt tried to kill her on Halloween.

At the start of the film, Tootie tells the iceman (Chill Wills) that her doll has “four fatal diseases” and how she will bury her and have a funeral for a perfectly good doll (maybe this is just a ploy to get new toys?).

At Halloween, she really is a little hellion. She throws flour in the face of an unsuspecting neighbor and shouts, “I hate you!”-part of a turn-of-the-century Halloween tradition that we never should bring back.

Tootie and Agnes stuff a dress and put it on the trolley tracks. John Truitt drags Agnes and Tootie out of the way, so they don’t get hurt or caught by police. As a result, Tootie splits her lip and loses a tooth.

She is carried into the house sobbing and saying, “John Truitt tried to kill me!” prompting Esther to go next door and beat him up.  Her family comforts Tootie by letting her wear one of Esther’s nightgowns and giving her a gigantic piece of cake (has anyone else noticed the cake in classic films is HUGE?). Even after her mother (Mary Astor) discovers Tootie was lying, they let her keep the cake and nightgown because she was a “good girl when the doctor was there.”

But the real clincher is the Christmas scene.

Understandably, Tootie is upset about leaving their home in St. Louis to move to New York.  Esther comforts her younger sister by singing, “Have Yourself a Merry Little Christmas.”

Does this calm the child down? No! Inexplicably, she runs outside in the snow after midnight, starts attacking snowmen they worked so hard to build earlier that day.

Because of Tootie’s crazed snowman moment, their father (Leon Ames) changes his life plans to make his family happy, again Tootie getting her way.

Steve and Flavia wait to see if a cow will kneel for baby Jesus on Christmas morning. (screencapped by me)

Flavia was told that Susan’s boyfriend Steve (George Murphy) has been on a trip around the world, but really he has been in jail.

Other harmless white lies and old wives’ tales are told to Flavia, such as mice turn into money, cats all have nine lives, and wishes on stars come true. When Flavia finds out none of these are true- including that Steve really didn’t travel around the world- she is sent over the edge.

“If it isn’t the truth, then it’s a lie, isn’t it,” she says to her pregnant, bed-ridden mother. “I don’t know who to believe or what to believe. Everybody lies to me.”

In a Margaret O’Brien moment of hysterics complete with sobbing, she runs out of the apartment with her mother running behind her, who falls down the stairs and becomes ill…basically because of Flavia.

However, regardless of her bratty moment, Flavia finds a miracle in order to save her mother.

And the cow kneels. This scene is utterly ridiculous. (screencapped by me)

The movie ends ridiculously with Flavia and Steve waiting at the stroke of midnight on Christmas morning to see if a cow will kneel to honor the newborn king-another old wives’ tale her mother told her.

If the cow kneels, it will be a miracle to make her mother better and will restore Flavia’s faith in her family. Lo and behold, the cow kneels, and everyone lives happily ever after.

Maybe I’m unnecessarily harsh because I’m simply not a fan of Margaret O’Brien. I’m not sure if O’Brien is the brat or if it’s the characters, but regardless I can’t take the sobbing and would be really angry if a hysterical little girl knocked down my snowman.

**2020 edit: I don’t mind Margaret O’Brien as much these days, but I do still like to joke that she ruins Christmas in these films. I clearly understand that these are the roles MGM cast the child in.

Errol Flynn as you have never seen him before

I hope you have time to fit them in before the holiday season ends-Christmas officially ends on January 5 with the 12 days of Christmas- or remember the films for next year. Enjoy!

•All Mine to Give (1957): This is a Christmas movie, but it’s a real downer. Jo (Glynis Johns) and Robert (Cameron Mitchell) raise a large family, and then they both tragically die. The kids (including Patty McCormack of “The Bad Seed”) try to continue living together, but the town threatens to split them up. However, they somehow are able to fight the greedy townsfolk and stay together. To review: This isn’t a particularly happy Christmas movie, and I only really thought it was okay. But it reminds us that family is important and shouldn’t be seperated.

•Never Say Goodbye(1946): Not your typical Christmas film, but you see Errol Flynn dressed up like Santa Claus!  Phil (Errol) and Ellen (Eleanor Parker) Gayley are divorced. Their daughter Flip (Patti Brady) and Phil aren’t very happy about the divorce and hope to win Ellen back from her new boyfriend, Rex (Donald Woods).  All of this takes place during Christmas as Phil and Rex both dress up like Santa and a comedic mix-up occurs. To review: A cute movie that really takes place during Christmas by chance, but still shows the importance of family. This is actually one of my favorite Errol Flynn movies, because we get to see him in a comedic, husband type role in New York, rather than a swashbuckling role in Spain.

Doris Day, Gordon McCrea, Rosemary DeCamp and Leon Ames in “By the Light of the Silvery Moon”

I put these two films together since they are similar and the second is the sequel to the first. In a nutshell: tomboy Margie Winfield (Doris Day) falls in love with idealistic Bill Sherman (Gordon McCrea) and her parents -mostly her father-disapprove. In the midst of both of these movies, there is Christmas. Margie breaks her leg and can’t go to the Christmas dance with Bill in “On Moonlight Bay“. Margie still manages to limp out on the porch and sing “Merry Christmas to All” with carolers.  In “By the Light of the Silvery Moon,”  Bill meets the family at a skating pond and surprises Margie and finally decides to marry her after bickering throughout the movie. To review: These are both similar to “Meet Me in St. Louis”: it takes you through a year of a family during the turn of the century and manages to fit in Christmas.  Like the others, this is a  really fun, happy family film.  “On Moonlight Bay” and “Silvery Moon” are probably my favorite Doris films. I have always enjoyed her and Gordon MacRea in films together.

•Susan Slept Here (1954): Juvinile delinquent Susan Landis (Debbie Reynolds) is sent to spend the holidays with screenwriter Mark Christopher (Dick Powell) so he can study a delinquent for a script he’s writing. Lots of comedic events ensue, and the much older Christopher falls in love with the very young Landis. To review: This is a pretty well known Christmas movie, but I feel like it gets over looked as we grab for “Holiday Inn” and “It’s a Wonderful Life.”  Though Powell is 28 years older than Reynolds, its a very cute movie and worth looking into. Also keep an eye out for a much older Glenda Farrel. She is still as beautiful and funny as she was in the 1930s.

•Swiss Family Robinson (1960): The Robinson family shipwrecks on a tropical island on their way to New Guinea.  Mom (Dorothy McGuire), Dad (John Mills), Fritz (James MacArthur), Ernst (Tommy Kirk) and Frances (Kevin “Moochie” Corcoran) learn how to live life on an island away from civilized Switzerland. This includes catching baby elephants, fighting off pirates (played by Sessue Hayakawa) and even celebrating Christmas. Surprisingly, yes, this movie does have Christmas in it. Fritz and Ernst return on Christmas to the treehouse after exploring the island for several months. They bring back Roberta (Janet Munro), a girl they rescued from pirates, and fight over who gets to dance with her during the Christmas celebration. To review: Sure they are in the tropics, but they find time to celebrate Christmas. Even if they didn’t, it’s still a really nice family film, and my roommate, Sybil, and her family watch it every Christmas. 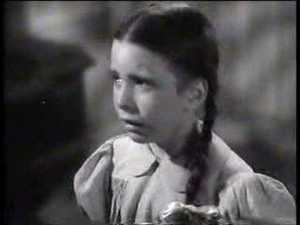 If you have ever had an urge to see Margaret O’Brien cry, here is your chance. Flavia (O’Brien) feels like everyone is lying to her. Her mother (Phyllis Thaxter) has told her old wives tales that aren’t true. Some of these are that mice turn into money, so that Flavia wouldn’t be afraid of mice (I have never heard, this have you?) and that cows kneel at midnight on Christmas Eve for Jesus. Flavia also finds out that her friend Steve (George Murphey) really didn’t travel around the world, but was in jail. After having a temper tantrum and potentially risking her pregnant mother’s life, Flavia realizes Christmas miracles do come true when she sees a cow kneeling for the Savior and her mother lives. To review: Parts of this movie are fine, but when Margaret starts shedding those tears start getting a bucket to bail out the water. I really like George Murphy, Phyllis Thaxter and Angela Lansbury in this movie, but O’Brien was also getting a little too old to play a six year old girl, when she was really 11.

Happy holidays! Be sure to check back from one more special holiday post on Christmas day!