t’s no secret that the Hollywood Comet loves musicals.
In 2010, I revealed I had seen 400 movie musicals over the course of eight years. Now that number is over 500. To celebrate and share this musical love, here is my weekly feature about musicals.

This post was updated to reflect the Academy Awards won.

Plot:
Living in Los Angeles, Mia (Stone) is an aspiring actress who works as a barista in a coffee shop. Sebastian (Gosling) is an unemployed jazz musician who is bitter that he lost his previous jazz club and plans to open a new club. The two meet, fall in love and encourage each other’s dreams.

END_OF_DOCUMENT_TOKEN_TO_BE_REPLACED

This week’s musical:
“Les Parapluies de Cherbourg” or “The Umbrellas of Cherbourg” — Musical #285

Plot:
Told in three part, the movie begins in 1957 and ends in 1964.
Performed much like an opera where all the French dialogue is sung, 17-year-old Geneviève (Deneuve) is in love with 20-year-old Guy (Casteluovo) who works as a mechanic.  Geneviève’s helps her mother (Vernon)  run an umbrella shop in Cherbourg, France. Her mother objects to them getting married because they are too young. Guy is drafted to fight for two years in the Algerian War.
While he is gone, Geneviève finds she is pregnant with his child. Her mother works to convince Geneviève to forget about Guy and to marry a more wealthy jewel dealer, Roland Cassard (Michel).

Highlights:
-Different from American musicals, there is no dancing and no show stopper song. If the lines were not all sung, it would be just a normal drama.
-The color is very candy-coated and gorgeous. Costumes of the actors match the brightly colored paint, wallpaper and decor. 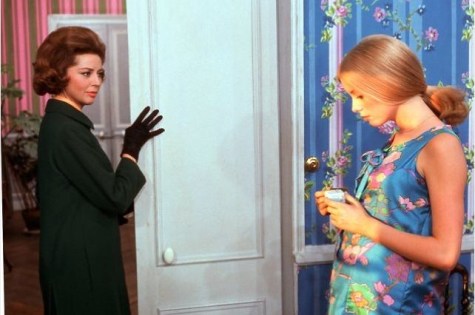 -The scene where Roland and Geneviève sit across from each other at the dinner table. As they speak to one each other, they look straight into the camera and speak.

-The 1960s fashions are gorgeous and as colorful as the backdrop.
-The heart wrenching ending that leaves so many questions

Trivia:
-Grand Prize Winner at the 1964 Cannes Film Festival
-Every actor in the all singing, opera-like film was dubbed:
Danielle Licari: Geneviève Emery
José Bartel: Guy Foucher
Christiane Legrand: Madame Emery
Georges Blaness: Roland Cassard
Claudine Meunier: Madeleine
Claire Leclerc: Aunt Élise
-“Umbrellas of Cherbourg” follows the Jacques Demy film “Lola” (1961). The character Roland Cassard is in “Lola” and in “Umbrellas” sings about a woman he once loved named Lola and how she broke his heart.
-The film is divided into three parts from 1957 to 1964: The Departure, The Absence, The Return
-An English stage version was adapted in 1979.
-Nominated for four Academy Awards in 1966 including: Best Music, Original Score for “I Will Wait for You;” Best Music, Score; Best Music, Scoring of Music, Adaptation or Treatment; Best Writing, Story and Screenplay – Written Directly for the Screen

Notable Songs:
-Each scene and scenario has it’s own song. The tunes are a mix of jazz to ballads.
-The most popular song from the film is “I Will Wait for You” sung by Geneviève and Guy before he leaves on the train to join the military.

My Review:
“Les Parapluies de Cherbourg” is one of my favorite musicals-up there with my all-time favorite “West Side Story” (1961). I love the gorgeous candy-coated color, the costumes and the heart wrenching sadness.
But most of all, I love the innovative all-singing French dialogue. Some lines are poetic while others are as simple as “Eat a little fruit” or “Have you had dinner?”
The story line is simplistic but doesn’t have the normal happy ending that an American 1950s or 1960s musical may have. Don’t let the subtitles and all singing throw you off, you won’t regret giving this musical a chance.

A few scenes to share to show the beautiful coloring”

Guy and Genevieve embrace after finding out he will be drafted

Genevieve is pregnant with Guy’s child and Carnival is going on outside.

The young lover, both married, meet again after five years.

This is part of the Summer Under the Stars blogathon for Catherine Deneuve Day.