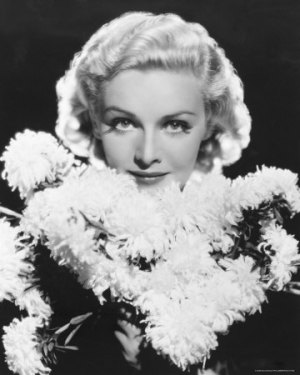 Publicity photo of Madeleine Carroll from the 1930s.

She went from being one of the highest paid actresses in Hollywood at $250,000 a year to working for the Red Cross at $125 a month.

Carroll said she had a new career: helping win the war.

Before the bombing of Pearl Harbor in the United States, Carroll’s sister Marguerite Guigette Carroll was killed on Oct. 7, 1940, in a German air raid in London.

“My younger sister learned how to be a very excellent typist but was killed at her typewriter by a direct hit from a German bomb in London’s Blitz,” Carroll said in a 1949 Rotary Club speech. “It seems to me that had the generation previous to hers been more interested in encouraging good neighborliness between countries, there is a chance my sister might be alive today.”

But before her sister was killed, Carroll turned over her French chateau for children removed from Paris and other French cities. She also started holding benefits in Hollywood to send money to Europe, according to a Jan. 21, 1940, article in the Pittsburgh Press.

In 1942, Carroll married newcomer actor Sterling Hayden. Hayden felt his place was fighting in the war and after two roles in Hollywood he enlisted in the Marines. 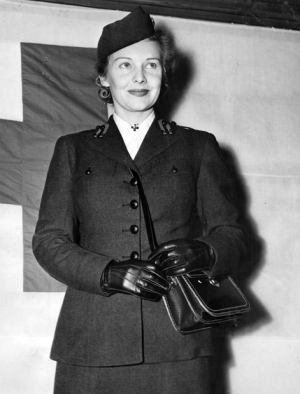 Madeleine Carroll training at the American University in Washington for service in the Red Cross in 1943.

“I’m the proudest woman in the world because my husband will be a buck private in the Marines,” Carroll was quoted in an Oct. 23, 1942, article in the Milwaukee Journal, “Madeleine Carroll Shelves film career for duration” by Sheliah Graham.  “I want to participate in the best of my ability to winning the war. We both feel that glamour has no place during this difficult period.”

Carroll and Hayden even changed their names, because they felt their star status could be detrimental to their new wartime careers. The two became Sterling and Madeleine Hamilton, according to a June 1943 article in the St. Petersburg Times, “Two Film Stars Change Their Names.”

Carroll’s first job in war work was in the newly formed US Seaman’s Service in New York as the director of entertainment, which was like the USO for Merchant Marines.

“I chose this work because while a great deal is done for the boys in the Army and the Navy, people are inclined to forget the boys not in uniform who risk and lose their lives on the ships taking food and supplies to the allied soldiers,” Carroll was quoted in the 1942 Milwaukee Journal article. “We want to raise enough money to open clubs and recuperation centers in all the big cities and American ports…we want to take care of the merchant seaman who are maimed, or otherwise ill, after the war as well as during.”

After spending 18 months with the US Seaman’s Service, Carroll worked over seas with the Red Cross.

She worked with the American Red Cross at the 61st station Army hospital in Foggia, Italy, where she hoped to be assigned as a staff aid in an evacuation hospital.

“I’m grateful to be in the Red Cross, because none of the girls stare or act like I’m a celebrity,” Carroll said in a March 20, 1944, Associated Press brief in the St. Petersburg Times. 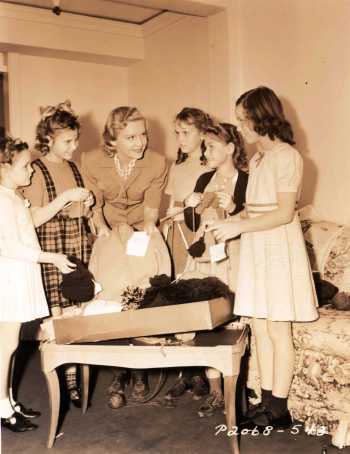 Madeleine Carroll looking after war orphans in her French Chateau

Along with working in the hospital, Carroll worked on the hospital train for four months taking wounded men to ships that took them home, according to a May 9, 1945, Milwaukee Journal article.

Each train carried 300 to 400 men with three bunks on each side holding a wounded man. Carroll estimated working with 25,000 military men, the article described.

She recalled a time when a man with a leg injury helped on the train by shining a lantern on a man in a lower bunk with a chest injury so bad that his ribs were exposed, according to the 1945 article.

Carroll was not trained as a nurse, but tried to keep the men’s morale up with cookies, music or comforting them.

“I never have known a man too wounded to eat a cookie,” she said.

“How nice it is to be served by Princess Flavia,” one soldier said, reaching his arm out to her, referencing her role in “Prisoner of Zenda.”

After V-E Day, Carroll helped unwed mothers in France, according to a Nov. 14, 1945, Milwaukee Journal article, “Madeleine Carroll caring for war babies born in France out of wedlock.”

Carroll received letters from girls worried about bringing up a baby on their own with an unknown father. She met girls with babies at her door step in France.

In each article written between 1942 and 1946, Carroll was credited as “the former actress” or “retired star.”

Several times she was quoted as saying she was incredibly happy and never wanted to return to films.

Hayden and Carroll divorced in 1946, and they both eventually returned to Hollywood, both making their first film back in 1947.

While Hayden’s career took off in the 1950s, with films like “Asphalt Jungle,” Carroll made three more films and made four television appearances. She retired from acting in 1955 and lived the remainder of her life out of the public eye.

Even while helping with the war effort, whenever a soldier would ask her “Are you really Madeleine Carroll,” she replied “Don’t let them kid you.”