This week’s musical:
“Babes In Toyland

Plot:
The film is introduced by Mother Goose (McCarty) and her goose Sylvester. Mary,Mary Quite Contrary (Funicello) and Tom the Piper’s Son (Sands) are to be married. However, evil Barnaby (Bolger) has other ideas. Mary will inherit a large sum of money when she marries and Barnaby wants it. He hires two crooks (Calvin, Sheldon) to kill Tom by throwing him into the sea. Barnaby is also going to steal Bo Peep’s (Jillian) sheep so that Mary no longer has income and will have to marry him. However, the crooks decide to make their own profit by selling Tom to gypsies, rather than drowning him.
While Barnaby is trying to woo Mary, the other children search for the lost sheep in the Forest of No Return. They all stumble upon Toyland, where the Toymaker and his assistant (Wynn, Kirk) are preparing for Christmas.

Annette Funicello as Mary Contrary and Tommy Sands as Tom Piper in “Babes in Toyland.”

Trivia:
-The first live-action musical made by Disney and it failed commercially. The next live action, full-length musical was “Mary Poppins” (1964).
-Walt Disney had Annette’s dark hair tinted red for the film, according to Funicello’s autobiography “A Dream Is a Wish Your Heart Makes: My Story

.”
-Annette Funicello wrote in her book that “Babes in Toyland” was her favorite film making experience.
“It was one of those rare times when everything about making the film- from my director, my co-stars, the crew, the costumes, even the scenery- was perfect,” she wrote.
-Annette wrote it was a thrill to work with Ray Bolger who was “such a gentleman.”
-James Darren and Michael Callan were both considered for Tommy Sands role of Tom Piper, Funicello wrote. 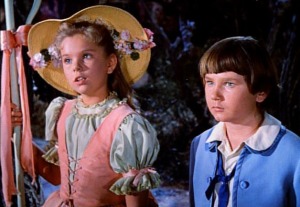 -The “I Can’t Do the Sum” number was filmed using the Chromakey technique, as several different colored Annette’s jump out and also sing.
-At one point during the “I Can’t Do the Sum” number, Annette is walking on her hands, as her character thinks this could save money on shoes. Annette was really walking on her hands.
“Technicians had to wire all of my clothing, down to each layer of my petticoat, and I wore a wig, the strands of which were wired as well so that may hair wouldn’t fall in my face while I was upside down,” she wrote.
-Annette loved the wedding dress she wore in the film so much, that she contacted the film’s designer Bill Thomas when she was married in 1965 to design her dress.
-The stop-motion toy soldiers during Tom and Barnaby’s battle took six months to film.
-The film premiered in 1961 around Christmas.
-Version of the 1934 Laurel & Hardy “Babes in Toyland.”
-Walt Disney visited the set every day, Annette wrote.
-The voice of Sylvester the Goose was director Jack Donohue.
-Film debut of Ann Jillian.

Actor quotes on the film:
-“This was the first, and unfortunately, the last movie I made in which I actually danced something besides the watusi or the swim. Not to put those other films down, but I always considered myself a dancer before anything else, and through the sets of Toyland and Mother Goose Village, I danced across the screen in a way I’d always dreamed of.” -Annette Funicello

-I thought he was delightful and so did everyone else. You couldn’t not like him. He was completely crazy and he was just as crazy offscreen as he was on. But it was all, of course, an act. He was a very serious, religious man in his own way, but he loved playing Ed Wynn, the perfect fool, the complete nut. And he was good at it. Actually I think the movie is sort of a klunker, especially when I compare it to the Laurel and Hardy Babes in Toyland. It’s not a great film but it has a few cute moments. It’s an oddity. But I’m not embarrassed about it like I am about some other movies I’ve made.” – Tommy Kirk on Ed Wynn

Highlights:
-The dance by the gypsies
-Any time Annette Funicello is on screen

Annette Funicello in “I Can’t Do the Sum”: 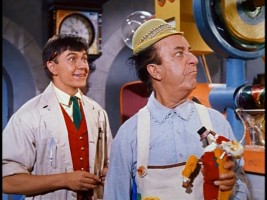 Have you ever watched a movie that you REALLY want to love but just can’t?
That’s how I unfortunately feel about “Babes in Toyland” (1961). My family even owns this movie because we love Annette and really want to love this film.
Walt Disney was hoping to make “Babes in Toyland” to be on the same scale as “Wizard of Oz” (1939), but it somehow just didn’t pan out.
I guess I’m not alone in my dismay, since this was a commercial failure when it was released in December 1961.
It has it all- Annette, who I adore; an excellent cast, there isn’t an actor in this I don’t love; beautiful costumes; colorful sets; and it’s Disney! But somehow it falls short.
Though I love musicals, this movie is song after song after song. Probably because it is based off of a 1903 Victor Hubert operetta.
My favorite song by far is “I Can’t Do the Sum,” where Annette Funicello worries about how her family will pay the bills. I guess I also really like this song, because I related to it when I started living on my own.
I think another flaw is that the story line lags in places and 105 minutes seems a bit long for this story.
The villains in the film also are irritating. Though Ray Bolger, Henry Calvin and Gene Sheldon are all wonderful actors, their characters are tiresome. When my mom and I revisited this film, we would groan every time they came on screen.
Don’t get me wrong, I don’t hate “Babes in Toyland.” I just wish it could be better. For me, the best part of the film is any time Annette comes on screen. Annette was such a bright spot in anything she was in and is what makes “Babes in Toyland” worth watching at all.
I also love Disney regulars Tommy Kirk and Kevin Corchoran, who are both in the film, but sadly neither has very much screen time.
I’m not sure what could have made this film better. Fewer songs? Maybe shorter than 105 minutes? More Annette? I don’t know. I just wish Disney’s first full-length, live-action musical wasn’t such a klunker.