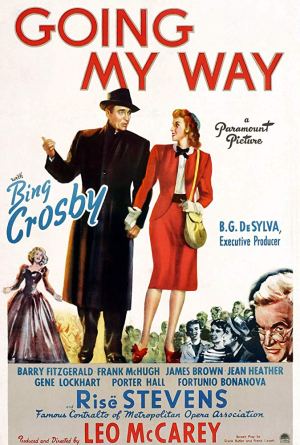 Plot:
Father Fitzgibbon (Fitzgerald) is the head of a church that is facing financial troubles. Father Chuck O’Malley (Crosby) is assigned to help get the church back on its feet. Father O’Malley has new, unconventional ideas of how to help the community and raise money for the church. O’Malley and Fitzgibbon face differences of opinions, while they both try to do what’s best.

END_OF_DOCUMENT_TOKEN_TO_BE_REPLACED 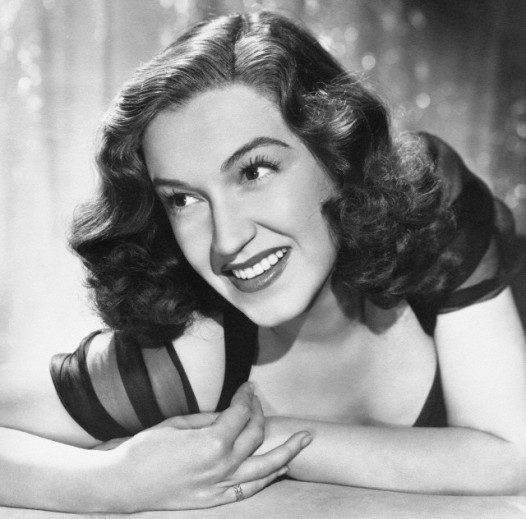 A Kennedy Center Honoree, 351 performances at the Metropolitan Opera House and handful of Hollywood films.

Opera singer and actress Risë Stevens had an impressive resume, including a 62 year marriage.

Stevens with Barry Fitzgerald and Bing Crosby in Going My Way, 1944

She is best known in the opera world for being a successful operatic singer on the stage. However, classic film fans will recognize her from her role in the Bing Crosby film “Going My Way” (1944).

In the film, Stevens plays an old girlfriend of Crosby, who is now a Catholic priest, Father O’Malley. After he turned to life as a priest Stevens becomes a successful singer and performs selections from “Carmen” in the movie. Stevens helps save the church from financial troubles by performing a piece of music written by Father O’Malley, “Going My Way.”

“I probably would never have reached that vast public had I not done films,” said Stevens. “At least, I won a lot of people over to opera.”

Stevens’s first film was in 1941 with fellow opera singer, Nelson Eddy in “The Chocolate Soldier.” 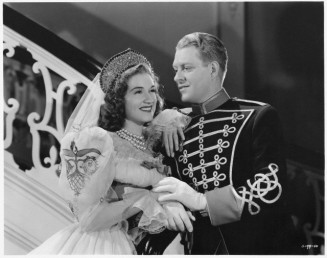 Rise Stevens and Nelson Eddy in The Chocolate Soldier, 1941

“He really could have had an operatic career, but he just made too much money, too soft and too easy,” she said.

But her career is much vaster than a few Hollywood films.

Stevens performed with the Metropolitan Opera from 1938 until 1961, leaving the opera while she still had her voice, according to her obituary in the Miami Herald.

“It always bothered me, these great singers when I heard them again and again, remembering how magnificent they sounded once and no more,” she said.

Born in New York, she sang on the “Children’s Hour” radio show when she was a little girl. She later studied at Julliard. When she was invited to perform with the Metropolitan Opera, she declined. She said she wasn’t ready and made her formal debut in Europe, according to her New York Times obituary.

“I had a good career,” she is quoted in her Miami Herald obituary. “Now the joy is in watching the young musicians grow, mature, and perhaps become successes.”

Rest in peace to one of America’s best singers: Rise Stevens.