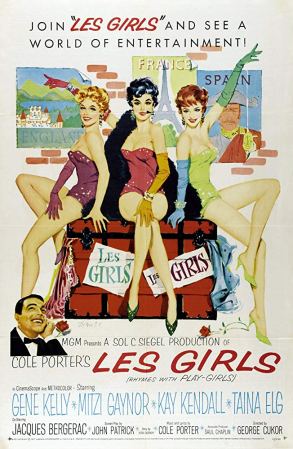 Plot:
Performer Sybil Wren (Kendall) is on trial for libel after she releases a tell-all book. While on the stand, she tells the story of her days with the traveling act Les Girls, led by Barry Nichols (Kelly) and co-starring with two other dancers Joy Henderson (Gaynor) and Angèle Ducros (Elg). Sybil’s book accuses Angèle of having an affair with Barry, while Angèle accuses Sybil of the same. Each person retrospectively tells their side of the story.