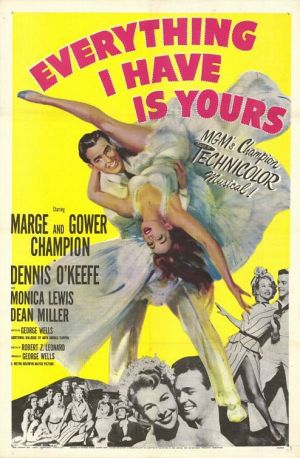 This week’s musical:
“Everything I Have is Yours” –Musical #486

Plot:
Married dancing couple Pamela (Marge) and Chuck Hubbard (Gower) make it big in a show on Broadway. The first night of their success, Pamela finds out she’s pregnant and can’t continue dancing. Once the baby comes, Pamela is encouraged to stay home and raise her child. Problems arise in Pamela and Chuck’s marriage as his fame grow. 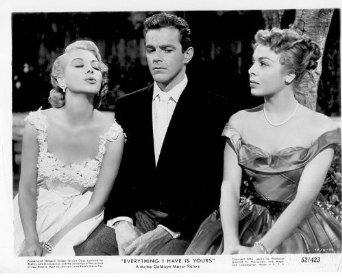 Trivia:
-The lead couple in the film, Marge and Gower Champion, were married in real life from 1947 until their divorce in 1973. The dancing couple had two children, Gregg (b. 1956) and Blake (b. 1962). The Champions starred in several other films together such as “Show Boat” (1951), “Lovely to Look At” (1952) and “Jupiter’s Darling” (1955)
-Originally supposed to star Red Skelton and Vera-Ellen, according to TCM.
-Gower Champion did most of the choreography for the film.

Highlights:
-It’s always a delight to watch the married couple dance together. Both Marge and Gower were excellent dancers and their moves, technique and dancing chemistry make all of their numbers exciting to watch.

When you glanced at this film in your TCM Now Playing Guide, you may have thought, “Ah, a musical starring Marge and Gower Champion in Technicolor. Sounds like a fluffy b-musical.”

And I can’t say I thought much different. I figured this would be a colorful splash of fun with several fantastic numbers. But I was wrong. This is an honest dramatic musical that look at the issues with marriage and fame.

Real life married dancers Marge and Gower Champion play a dancing married couple in the film. Though Marge didn’t give up her career for children like in the movie, the Champions in the movie and in real life both end in divorce. However, in true Hollywood form- the couple is unhappy in their divorced life and they are in each other’s arms in the last frame.

I enjoy the plot line, because I think it shows a fairly honest look at marriage. They are joyous as newlyweds, happy when the baby comes, but Pamela gets restless. She has little to do at home, because the baby has a nurse, and she wants to go back to work and dance with Chuck. But Chuck is having hit after hit with his new partner Sybil (Lewis). Jealousy also arise as Sybil is making eyes at Chuck. When Pamela finally takes an offer for a how- the marriage is blown to smithereens.

“Petty details all add up until the roof blows up,” the film says after they get a divorce.

The dancing is also a real treat of this film. Marge and Gower Champions’ dances together are exciting, interesting to watch and seamless. Their movements together and fluid and their chemistry is evident through their moves.

In several other MGM musicals the Gowers are supporting stars with a large dance number added in. This is one of the few, if not the only, where the Gowers are the leads in the film, and that makes it a real treat.

Marge Champion dances in a solo number in the film.