This is the fourth installment of our monthly classic actress beauty tips that I have read about AND tested. 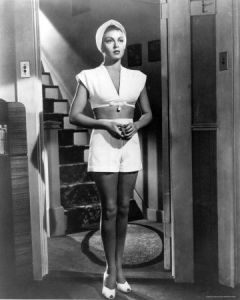 Lana Turner was one of the most beautiful women in films, and she also had flawless skin. For being rich and glamorous, Lana had surprisingly modest beauty regiments.

Along with using inexpensive Boraxo powdered soap as an exfoliant, Lana used Nivea Creme lotion to moisturize. According to her daughter Cheryl Crane’s book “LANA: The Memories, the Myths, the Movies,” Lana used the creme right after she got out of the shower to keep her skin soft, flawless and smooth. Marilyn Monroe also used Nivea Creme.

In some posts I give a “how to” portion but there is really no rhyme or reason on how to use Nivea. From what Crane says in the book, Lana would apply the creme all over her body right after getting out of the shower.

I started using Nivea in December after reading Lana used it and think that it is better than any other moisturizer or lotion that I have ever used. I have an issue with very dry ankles, elbows and knees and no other lotion has made them as smooth as Nivea does.

I will say, Nivea Creme is rather thick and sticky. It takes a little longer than a regular lotion to rub in and also takes longer to wash off of your hands. However, it will last all day once you put it on. I even feel like it helps reduce leg shaving.

I use the traditional Nivea Creme along with a Nivea chapstick and Nivea Soft, which is the same as Nivea Creme, just lighter and less thick and sticky.

To review: Ask anyone I know, I call Nivea the miracle lotion. I am a huge fan. I figured if Lana used it, it had to be good and I was right.