Plot:
Brother and sister Tom (Astaire) and Ellen (Powell) Bowen are a dance team and travel to England to perform for the royal wedding of Princess Elizabeth and Prince Philip, the Duke of Edinburgh. On the way, the two both fall in love which threatens to break up the act.

END_OF_DOCUMENT_TOKEN_TO_BE_REPLACED 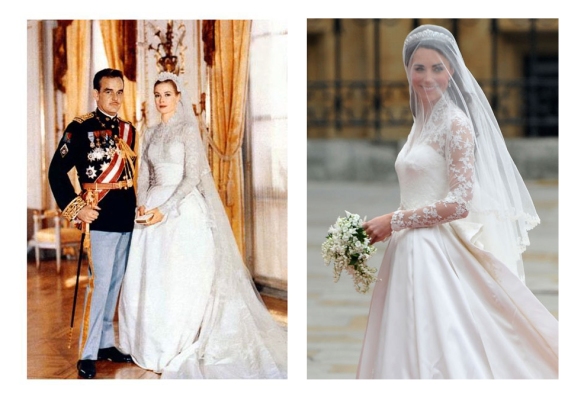 Princess Grace Kelly in 1956 and Princess Kate Middleton in 2011

I don’t think I’m the only person who thought “Grace Kelly” right when I saw Kate Middleton in her wedding dress this morning during the Royal Wedding.  Both looked lovely in their timeless dresses. The dresses are similar with the lace sleeves, high collars and flowing skirt.

Grace Kelly’s dress was designed by Hollywood costume designer Helen Rose who also designed the wedding dresses for Elizabeth Taylor and Debbie Reynolds.  Rose created costumes for movies like “Dangerous When Wet” (1953), “Father of the Bride” (1950), “The Harvey Girls” (1946) and “The Swan” (1956).

I love this style of gown and want sleeves whenever I get married too. Though I hate film remakes, I love to see fashion homages. I secretly hope that the designer had Grace Kelly in mind when the dress was created. Probably not though, but maybe!