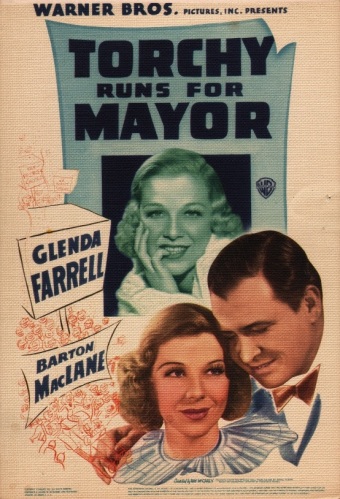 Plot:
Reporter Torchy Blane (Farrell) is writing stories about the corruption of Mayor Saunders (Richman) and how he takes money from crime bosses. To make Torchy stop, the mayor threatens to pull his advertising from her newspaper, which forces Torchy’s editors to stop publishing her stories. Torchy asks papers all over town to publish her stories and is rejected until one small paper accepts. After publishing the article, the editor of the paper is killed, and Torchy’s police officer boyfriend Steve (MacLane) investigates, and Torchy meddles. To get back at Torchy for butting into his case, Steve writes Torchy’s name in as a mayor candidate – which she embraces.

END_OF_DOCUMENT_TOKEN_TO_BE_REPLACED

A man is killed and sent C.O.D. to a Hollywood actress.

Rather than call the police, the actress calls her reporter friend to help her out.

The reporter investigates the case like he’s a detective.

He sneaks in houses searching for clues and finds jewels that can be used as evidence. The reporter then puts the diamonds in an ice cube tray to hide them from police. 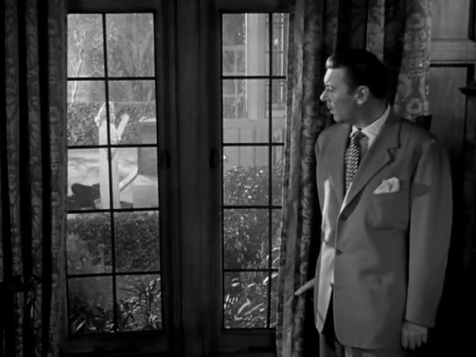 As these events occurred in “The Corpse Came C.O.D.” (1947) starring George Brent and Joan Blondell, my dad turns to me and asks, “I hope you don’t do these things at work.”

Later when Brent gets in a fist fight with a bad guy my dad asks, “Is there anyone at the Star that would be able to do that?”

As a reporter who loves classic movies, I go out of my way to watch films where the hero plays a reporter.

However, if I researched my stories using the same methods that reporters used in films, I would most likely get fired. 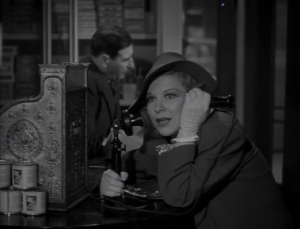 Glenda Farrell stars as Torchy Blane, a troublesome and wise-cracking reporter in 1930s films. Blane comically gets her information by hiding in trashcans and bugging rooms, techniques not used by contemporary reporters.

In classic films, reporters are often solving crimes like a police officer and often receive information by unethical means. At the Shelby Star, we do a lot of research on our stories, but I doubt we will ever solve a crime.

In the 1930s Torchy Blane film series, Torchy is constantly at odds with her detective boyfriend Steve McBride for being where she shouldn’t be.

Torchy can be seen eavesdropping, bugging rooms, hiding in trash cans and following bad guys to get the scoop on a story.

If I hid in a trashcan to find out the latest secrets of Cleveland County, North Carolina, not only would that be breaking media laws, I would also smell pretty bad. 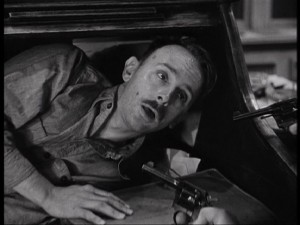 John Qualen hides in a desk in “His Girl Friday.”

In “His Girl Friday” (1940), reporter Hildy Johnson, played by Rosalind Russell, hides an accused murdered in her rolltop desk to get the scoop on a story. Unfortunately, I don’t have a rolltop desk at work, but even if I did, I’m not sure how the sheriff would feel if I stored suspects in my desk.

In another George Brent film “You Can’t Escape Forever” (1942), managing editor, Brent will get hunches by tugging on his ear like he’s communicating with somebody via Morse code.

Then Brent will come up with a fantastic hunch that he will print in the paper, which usually ends up being true.

If reporters worked solely on hunches without fact checking, the paper would be full of corrections that had to be run, rather than news stories.

In “The Philadelphia Story” (1940) reporters James Stewart and Ruth Hussey pose as family friends at the wedding of Katharine Hepburn. The two are tabloid writers there to get information on the story.

Getting information under false pretenses is unethical by today’s standards and would most likely leave you with a lawsuit.

Though there are several comedic representations of newspapers, there are films that represent journalism in a truer light, such as “The Story of G.I. Joe” (1945) about war journalist Ernie Pyle or “Citizen Kane” (1940) about the power of journalism. 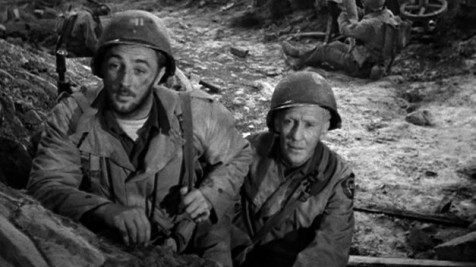 Robert Mitchum and Burgess Meredith (as Ernie Pyle) in World War II film “The Story of G.I. Joe” about reporting on the front lines.

As someone who works in newspapers, I don’t take offense to the unethical journalism in the 1930s and 1940s films, because I know most of it is there for comedic relief.

It doesn’t make me stop watching the films; you just have to take it all with a grain of salt, as you would with any movie.

Clearly newspapers have changed a great deal from the 1930s to today.  However, it does make me wonder how media laws and ethics have changed in the past 75 years.

So for my father: No dad, we don’t do any of that at the Star.

This is part of the Breaking News: Journalism in Classic Films blogathon co-hosted by myself and Lindsay at Lindsay’s Movie Musings. Read all of the wonderful contributions here! 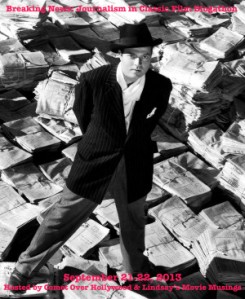 She’s a fast-talking blond who breaks every rule of reporting.
As a journalist, I should be appalled by Torchy Blane, but I really want to be her. She is the perfect mix of my profession and classic film love.

From 1937 to 1939, Torchy Blane solved crimes and caused trouble for her police detective boyfriend in nine films. 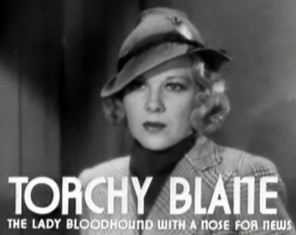 She also was part of the inspiration for Superman’s reporter girlfriend Lois Lane.
In a 1988 Time magazine article, creators of the Superman comics Joe Shuster and Jerry Siegel credited Glenda Farrell’s performance as Torchy Blane with their creation of Lois Lane.

“My wife Joanne was Joe’s original art model for Superman’s girlfriend in the 1930s,” Siegel is quoted from the interview in the book The Women of Warner Brothers. “Our heroine was, of course, a working girl whose priority was grabbing big scoops. What inspired me in the creation was Glenda Farrell, the movie star who portrayed Torchy Blane. Because of the name Lola Lane, who also played Torchy, appealed to me, I called my character Lois Lane.”

Produced by Warner Brothers Studios, the Torchy Blane series was one of many Hollywood B-movie series of the 1930s and 1940s, others include Maisie, Dr. Kildare, Boston Blackie, The Falcon and the Lone Wolf.

Though the other actresses play the part well, Farrell left the lasting impression. Her comedic timing, brassiness and nonchalant attitude brings Torchy to life. Her performances were complete with 400 word speeches given in 40 seconds as she talked her out of trouble.

In many of the films, Torchy is causing more trouble than she is writing stories and meeting deadlines.

Each film has a mystery to solve, and before Torchy’s detective boyfriend Steve McBride can take fingerprints, Torchy is one step ahead.

Her job is really more of an amateur detective than a reporter.
“Maybe you know who bumped him off,” Steve says in “Smart Blonde” (1937).
“Not off hand, but with a little time and something to eat, maybe I can help you,” says Torchy. 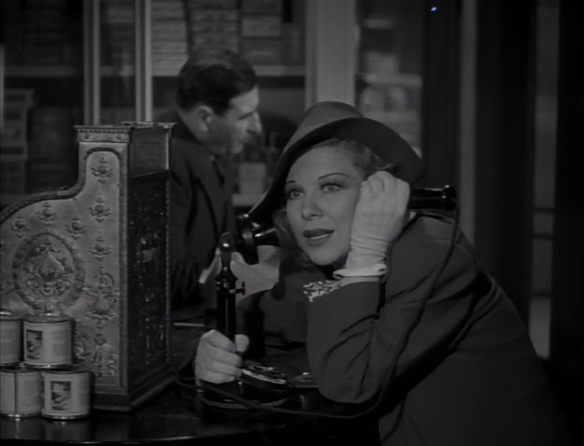 Torchy does some of her own sleuthing

In today’s world of journalism, Torchy’s means of sleuthing and reporting are ethically questionable:
-Hiding in a trashcan to eavesdrop
-Bugging rooms with microphones
-Snooping through rooms
-Talking with questionable sources

It’s amazing she even has a job at a publication.

At the end of each film, Steve McBride promises a steak dinner and marriage but at the start of the next film, there have yet to be any wedding bells.

Though the films were made for low budget entertainment, the New York Times in the 1930s gave the movies poor reviews, dubbing Torchy a “demon reporter.” They also wrote “we have a murder mystery solved by an endless succession of door-opening and shuttings, taxi-hailings, jumping in and out of automobiles and riding up and down elevators,” quoted in Howard Good’s book “Girl Reporter: Gender, Journalism and Movies.”

It’s possible that the Times mainly scoffed because the main character was a female star reporter, Good wrote. 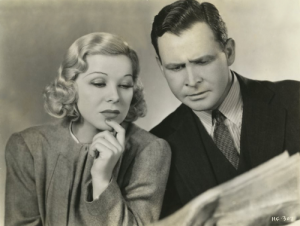 Dressed in professional suits, Farrell modeled Torchy after female reporters she knew and tried to make her believable.

“Before I undertook Torchy, I determined to create a real human being, not an exaggerated comedy type,” she said in a 1969 Times interview, quoted in the book The Women of Warner Brothers. “I met those newswomen who visited Hollywood. They were generally young, intelligent, refined and attractive. By making Torchy true to life, I tried to make a character practically unique in movies.”

Reporters could argue that Torchy Blane scripts are not representative of the newspaper industry.

However, as a contemporary female reporter, I love Torchy. I even asked my editors if I could change my byline to Torchy Pickens…but was denied.

Her sass, beauty and energy is endearing, even if she breaks every media law there is.

This is part of the Summer Under the Stars blogathon by ScribeHard and Sittin’ on a Backyard Fence.