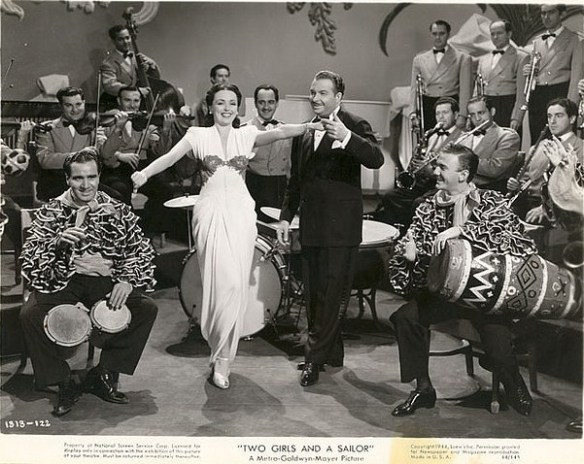 Lina Romay with Xavier Cugat in “Two Girls and a Sailor”

About three days ago I found out that the lovely Xavier Cugat rumba singer, Lina Romay, died on December 17.   I was really upset that her death went by me unnoticed, but obviously I wasn’t the only one who didn’t know because the New York Times only posted an obituary on January 1st.

I was planning on writing something about Miss Romay in the near furture. However, I think something was telling me to write about her when I unknowingly watched three Lina Romay movies in one day: “Adventure” (1945),” Love Laughs at Andy Hardy” (1946) and “Embraceable You” (1948).

Lina Romay sang for Xavier Cugat’s band during the 1940s, particuarly during World War II; when South American culture was popular in the United States as I mentioned in another blog post. 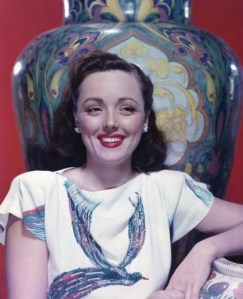 The first time I came across Miss Romay was in high school in “Bathing Beauty” (1941) as she sang “Bim Bam Bum” and “Alma llanera” with Mr. Cugat.  I thought she was pretty and had a nice voice, but dismissed her as another forgettable singer.

Romay popped up in several other movies after that like in “Two Girls and A Sailor” (1944) and “Weekend at the Waldorf” as Cugat’s singer.  In other films she got to flex her acting muscles. In “Honeymoon” (1947) she plays Shirley Temple’s rival and in the film “Embraceable You” (1948), she is cast as the wise-cracking, but caring friend of invalid Geraldine Brooks

Sadly, Miss Romay is drastically underrated and forgotten. Once the war ended, big bands and rumba bands fizzled and so did Miss Romay’s career.  I hate this, because she is probably one of my favorite singers-she performs many of the songs on my favorite CD “Maracas, Marimbas & Mambos: Latin Classics At M-G-M – Motion Picture Soundtrack Anthology.”

Miss Romay, you will be missed.  Your version of “Babalu” will always be my favorite over Dezi Arnez’s.  Rest in peace.

Trivia on Lina Romay:
-Daughter of a Mexican diplomat
-Born in Brooklyn
-Worked as a Spanish-language radio announcer for horse races at Hollywood Park Racetrack in the 1970s and 1980s (according to the NY Times)
-Was in 19 movies and television shows as an actress and seven movies as a singer.
-Be careful while you are looking her up. Apparently an “adult actress” named herself after our Lina Romay in the 1970s.  When I wanted to write Miss Romay for an autography, I could only find the adult star and not the rumba singer.

I leave you with a video of Lina Romay and Xavier Cugat from “Two Girls and A Sailor” sing “Rhumba Rhumba” (I love her dress):