Plot:
A beggar (Griffith) is thrown in jail and is carrying an opera he’s writing about Captain Macheath, a dashing real-life character and highway robber who has multiple wives. The beggar meets the real Macheath (Olivier) in prison, who reads and sings the opera. The opera is told in a retrospective story of how Macheath ended up in jail.

END_OF_DOCUMENT_TOKEN_TO_BE_REPLACED

Plot:
Mr. Earnshaw (Kellaway) lives with his two children Hindley (Scott) and Cathy (Wooton) at the family farmhouse, Wuthering Heights. When returning from a trip to London, Earnshaw brings home a young gypsy waif, Heathcliff (Downing). Heathcliff is raised as Earnshaw’s own with Hindley and Cathy – Hindley hates Heathcliff and Cathy befriends him, eventually falling in love with him. After Earnshaw dies the three grow up, Hindley (Williams) becomes the master of Wuthering Heights, drinks too much, and puts Heathcliff (Olivier) where he feels he belongs, as a servant. Cathy (Oberon) falls in love with Heathcliff, but he doesn’t behave in the grand manner she wants out of life and she doesn’t feel he can give her the life she wants. Their paths divide and come back together, and their mutual love destroys everything around them.

END_OF_DOCUMENT_TOKEN_TO_BE_REPLACED

But none of these couples come close to the class and sophistication of Vivien Leigh and Laurence Olivier. The Olivier’s really were truly the acting world’s (stage and screen) king and queen.

Always gracious, refined and most of all beautiful.  The Olivier’s were always stylish and pulled off the part of royalty very well.

Here are a few photos that illustrate their impeccable taste through the years. 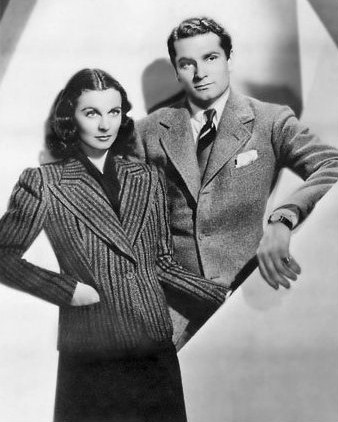 The photo that usually comes to mind when we discuss the Olivier's and their style. 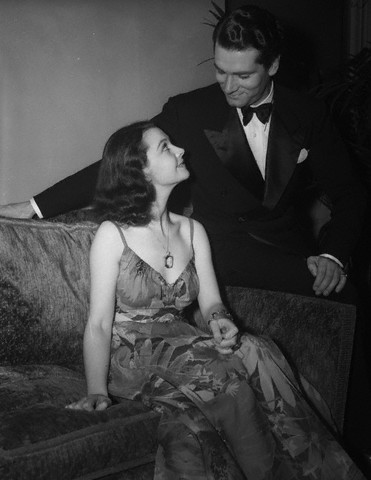 At home in 1941 illustrating the 'at home' look. I wonder if they ever did their own gardening? 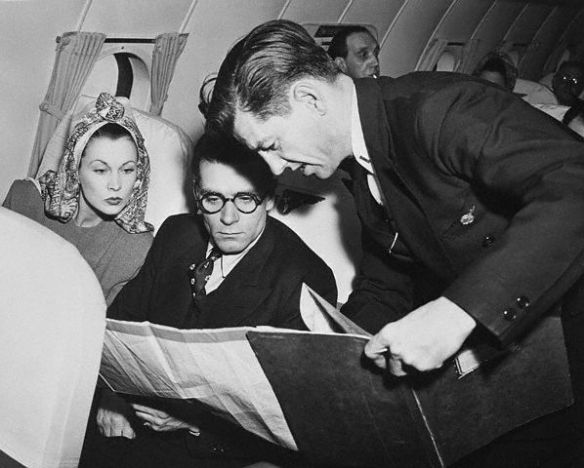 Vivien wearing a wonderful hat on a flight in 1946. 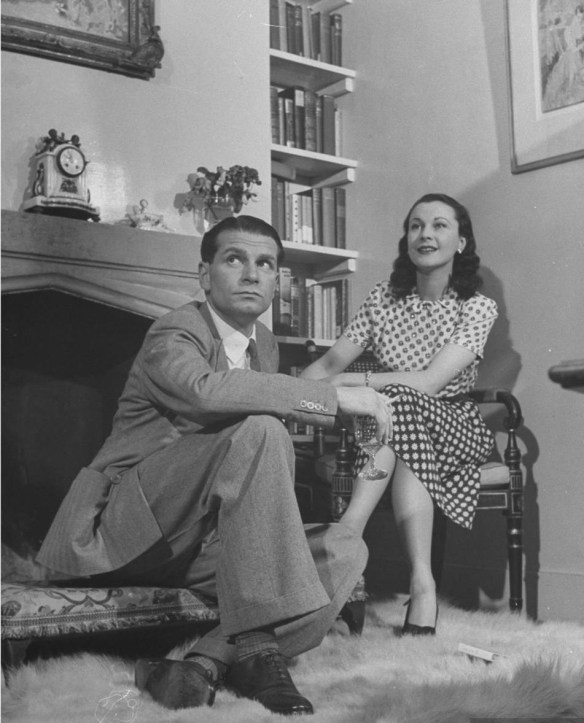 Still stylish yet casual as they relax at home in 1946.

Vivien looks really lovely and Larry looks wonderful in a tux in 1948 in London.

Waving like royalty after a 1949 performance of "School for Scandal." 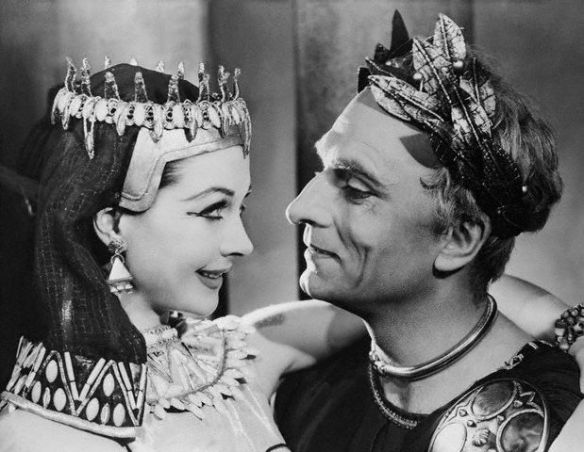 1951 in "Anthony and Cleopatra": One of the stage's most famous couples.

Beautiful couple on the dance floor.

Presenting her husband with an award at the Venice Film Show in 1952. 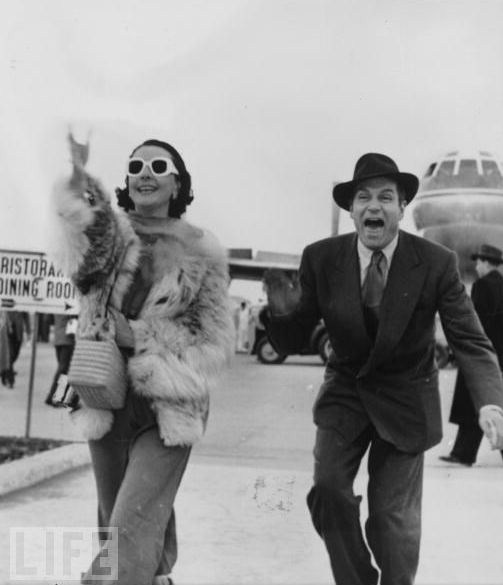 A hilarious photo from 1953 as they get off the plane in Venice.

An interesting fact: I actually was going to do a post about Vivien Leigh being the godmother to actress Juliet Mills, daughter of the Olivier’s friend John Mills and sister of actress Hayley Mills.  In an interview once, Juliet said she remembered being allowed to play in Vivien’s jewelry box.  Sadly, I couldn’t find enough information to a good post out of it, but I thought I could still share the information.

This post has been for the Vivien Leigh and Laurence Olivier Appreciation blogathon hosted by Kendra at vivandlarry.com.

Have you ever seen a movie that is so similar to another one, yet you know it isn’t a remake?

I’m not saying something like Disturbia (2007) and Rear Window (1954) which are so similar it might as well be a remake and there was a court case over the fact that the screenwriter of Distrubia copied Rear Window.

Both have very similar plots. The odd thing is that both of these films were movies adapted from books. Elephant Walk was written by Robert Standish in 1948 and Rebecca was written by Daphne Du Maurier ten years prior in 1938.

Let’s briefly over view the plots before we proceed with the comparison.

Rebecca (1940): A young woman (Joan Fontaine) meets a rich widower (Laurence Oliver) and has a whirlwind romance. They fall in love and marry after not knowing each other for very long. Shortly after moving into her new home, the young bride finds that she is not in control of her own household. Mrs. Danvers (Judith Anderson) the house keeper underminds everything the 2nd Mrs. DeWinter tries to do and constantly reminds her that she is not as good as the deceased wife, Rebecca.

Elephant Walk (1954): Rich plantation owner John Wiley (Peter Finch) from Ceylon comes to England specifically to find a bride who ends up being Ruth Wiley (Elizabeth Taylor). She marries him after only knowing him a brief time and finds plantation life in Africa difficult. Not only is life in Africa strenuous, but also the fact that the head man servant, Appuhamy (Abraham Sofaer), won’t let Ruth run her home. It makes things difficult because everyone idolizes John’s father, the late Mr. Wiley, and talks about him as if he is still alive.

If you don’t see the similarities through the plot summaries, then this will help:

1.) Both movies have a creepy housekeeper that won’t let the heroine run her home. It doesn’t make things any better when their husbands are cold and don’t stand up for them at all.

In both films, the servants worship someone who is dead and continue to act as if they are alive. In Rebecca it is Mrs. Danvers constantly reminiscing about old times with Rebecca of when she would get ready for parties and brush her hair as Rebecca told her about her evening. In Elephant Walk it’s Appuhamy still serving his late master and acting as if he is alive and giving orders. 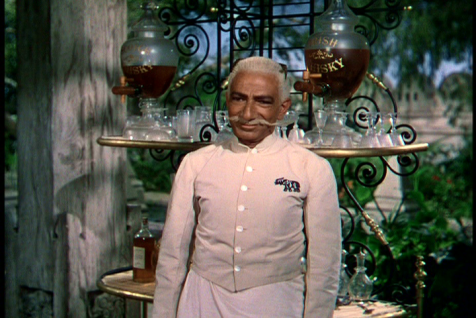