Plot:
On the 75th anniversary of The Evening Guardian newspaper, the publisher Matt Cooper (Dumbrille) tells editor Michael Cassidy (Douglas) that the newspaper is being shut down. Cooper also owns a scandal paper that Cassidy thinks is trash. To help prove The Evening Guardian’s value, Cassidy works on solving a prominent kidnapping case by tracing a $100 bill tied to the case. He seeks out Ellen Frazier (Platt), a teacher who was the only witness to the kidnapping. Cassidy and Frazier work together to solve the case so that Cassidy can save the newspaper.

END_OF_DOCUMENT_TOKEN_TO_BE_REPLACED

Plot:
Kitty (Johnson) meets jobless and down-on-his-luck Joe (Neal). After paying for his meal, Kitty hires him to be the driver for the gang she’s in, lead by Reno (Nedell). When the whole gang goes to jail, Kitty and Joe try to lead a crime-free life, but their past follows them.

END_OF_DOCUMENT_TOKEN_TO_BE_REPLACED

Plot:
Out of work vaudeville star Frankie Merriweather (Morgan) is trying to break into radio. When Frankie gets his own radio show, he is immediately fired when he causes a panic with his “Battle of the Planets” when listeners think it is a newscast, because he bypassed the advertisements.
Trying to figure out how to get back into his career and pay alimony to three ex-wives, Frankie gets his children (Grey, Lynn, Nunn) into the act.

Trivia:
-Virginia O’Brien’s first screen appearance
-Frank Morgan does a radio show called “Battle of the Planets,” which is a spoof of Orson Welles’s 1938 broadcast “The War of the Worlds.”
-Frank Morgan does “impressions” of Robert Taylor, Mickey Rooney, Hedy Lamarr on the phone, and Claudette Colbert, Clark Gable and Spencer Tracey in a a scene from “Boomtown.” The “Boomtown” impression is straight from the film. Mickey Rooney and Hedy Lamarr sound like they are not the real actors doing the voice over.
-Dan Dailey and Virginia Grey whistle “A Handful of Stars.” Their whistling is dubbed by Elvida Rizzo and Morton Scott

Highlights:
-Leo Gorcey in a small role as a bellhop
-Frank Morgan’s celebrity “impressions” (That are dubbed by the stars or other impersonators) 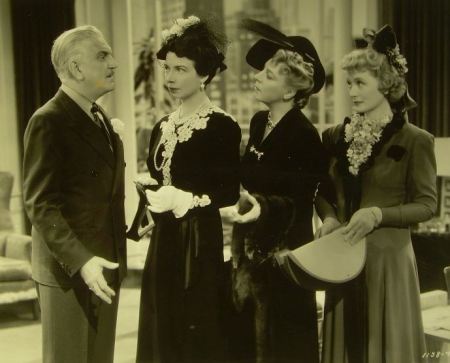 Frank Morgan has to earn money to pay alimony to three wives.

Notable Songs:
-“Carry Me Back to Old Virginny”
-“We’ve Come a Long Way Together”
-“When My Baby Smiles at Me”
-“A Handful of Stars”

While Metro-Goldwyn-Mayer is often best remembered for it’s lavish, big-budget musicals such as “Singin’ in the Rain,” “Babes in Arms” or “Seven Brides for Seven Brothers.”
However, the studio also cranked out several B-level musicals, that are equally entertaining. “Hullabaloo” is an example of one of those lower budget musicals.
Frank Morgan and Virginia Grey are the leads in this film, and while they were famous and appeared in several films, they generally were supporting roles in larger budget MGM movies.
While the movie’s plot is about actors trying to break into radio, it gives an interesting glimpse into entertainment history.
The radio is seen as an “economic salvation” for struggling vaudeville stars as they transition their careers, according to “Radio in the Movies: A History and Filmography, 1926-2010” By Laurence Etling.
Radio was another outlet for vaudeville stars to keep performing as that medium of entertainment faded.
There are also a few notable things about this 78 minute film. First, just a couple of years after Orson Welles’s 1938 broadcast “The War of the Worlds,” “Hullabaloo” spoofs the panic that Welle’s radio broadcast caused. I thought it was interesting just because it showed how “War of the Worlds” impacted pop culture- even then- enough to joke about. I could be wrong, but I feel like could be comparative to jokes in the media about current celebrities.
Another highlight in the film are Frank Morgan’s “celebrity impressions.” Obviously…Morgan is not actually doing the impressions- most of them sound like the real actor speaking – but it’s so ridiculous to see that it’s humorous.
But for me, the true highlight was Virginia O’Brien’s first credited on-screen role. The frozen-faced singer pops on screen for two musical performances.
Though it’s a very silly film, if you have a little over an hour to spare, “Hullabaloo,” isn’t a bad way to spend it.