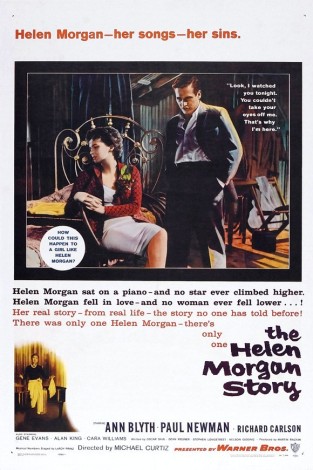 Plot:
Biographical musical film on the life of singer Helen Morgan. The film starts with Morgan (Blyth) starting out her career dancing at a carnival show that is managed by Larry Maddux (Newman).
Morgan becomes famous, going from nightclub singer to Broadway star. Along the way, her alcoholism and on and off relationship with Maddux torment her.
Morgan hits rock bottom, broke and drunk. The movie ends with Morgan healthy and being honored by celebrities and Walter Winchell.

-Ann Blyth had a lovely singing voice but was dubbed by singer Gogi Grant.
In an interview, TCM Primetime Host Robert Osborne asked Ann Blyth why she was dubbed.
Blyth told Osborne she figured Warner Brothers wanted a different sound so chose Grant. When Blyth was researching the role, she listened to a record of the real Helen Morgan and her voice was actually more soprano and not very strong. But Grant was popular at the the time, and she figured the producers thought that would help promote the movie.
The critics felt Blyth’s voice would have worked better in the film.

-“The Helen Morgan Story” was Ann Blyth’s last theatrical film.
In an interview with Robert Osborne, she said the parts just weren’t there anymore. She later was offered the lead in “The Three Faces Of Eve” which Joanne Woodward won an Academy Award for.

-Doris Day turned down the role of Helen Morgan, because she thought the hard drinking character would hurt her career. Day had similar concerns before she portrayed Ruth Etting in “Love Me or Leave Me” (1955), according to her autobiography.

-The same year, five months before the film was released, Polly Bergen portrayed “Helen Morgan” on television on “Playhouse 90.” Bergen won an Emmy for Best Lead Performance by an Actress.

Notable Songs:
All of the songs are performed by Gogi Grant and are well known, including:
-“Can’t Help Loving that Man of Mine” from “Show Boat”
-“Bill” from “Show Boat”
-“The One I Love Belongs to Somebody Else”
-“Someone to Watch Over Me”
-“Somebody Loves Me”
-“You Do Something to Me”
-“Why Was I Born?”

For comparison of Helen Morgan and Gogi Grant’s voices, both singing “Why Was I Born?” –

Fifty-seven years later, I’m upset that Ann Blyth was dubbed by Gogi Grant.
Blyth said she thought Warner was looking for a different sound, but Blyth would have sang the songs well.

Morgan was married three times, which wasn’t shown in the film. She also died of liver failure due to alcoholism in 1941, yet the film unsurprisingly painted a happy ending.

“The Helen Morgan Story” isn’t a great movie, but it isn’t bad either. It is simply a run-of-the-mill sad, torch singer biopic that was characteristic of the 1950s. This time it was just Ann Blyth in the lead role, rather than Susan Hayward.

This fall, Comet Over Hollywood is doing a mini-series of “Classics in the Carolinas.” I’ll be spotlighting classic movie related topics in South Carolina (my home state) and North Carolina (where I currently live and work). 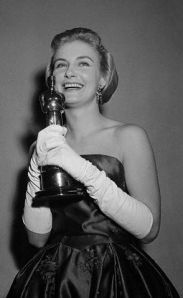 Joanne Woodward with her Oscar for “Three Faces of Eve” in 1958.

Woodward won an Academy Award for playing a woman who suffers from multiple personality disorder in “The Three Faces of Eve” (1957). But in real life, she was the envy of women everywhere as the wife of Paul Newman.

Originally born in Thomasville, Georgia in 1930, Woodward moved to Greenville, S.C. after her parents divorced. A teenager when they moved, Woodward started at Greenville High School as a sophomore and graduated in 1947.

While at Greenville High School she was beauty queen several times, “Sweetheart of 1947” her senior year, nominated “Best Looking” and a member of the cafeteria club, said classmate Catherine Tate in an interview. Woodward also attended Christ Episcopal Church in Greenville.

“I don’t know what Joanne Woodward’s ambitions are, but she was a born actress,” said one Greenville critic in an article about “I Remember Mama” in 1946.

Woodward wanted to go to Clemson University, a South Carolina state college 45 minutes away from Greenville, like her brothers but the college was still an all-male military college at the time. (I wasn’t able to find this story confirmed anywhere, but have always been told that. My family is big Clemson fans, with my parents, sisters, great-grandfather and grandfather attending and my other grandfather holding the position of Dean of Science at the university.)

Woodward went to Lousiana State University where she studied drama and then continued on to New York where she found work in plays and on television. Early in both of their careers, Woodward met Paul Newman. Newman was married at the time, but he eventually divorced and the two were married in 1958 until his death in 2008.

In 1992, Newman donated $50,000 to Clemson University in honor of his father-in-law, Wade Woodward, Jr. who graduated from Clemson in 1922. The money went towards the Green Room at the Brooks Center of Performing Arts, according to a January 1992 Associated Press article.

Woodward is currently living in Connecticut, since Paul Newman passed away in 2008. 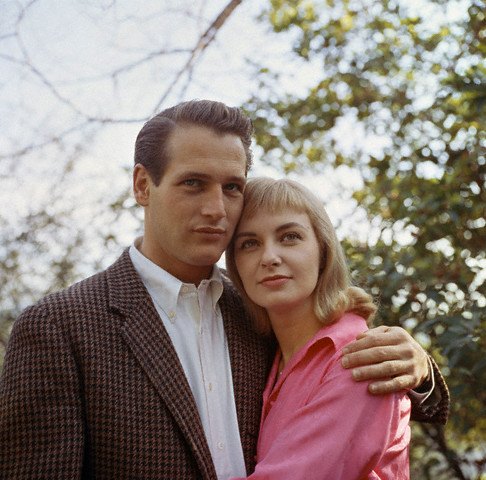 Paul Newman and Joanne Woodward in 1955

Anita Page in the 1920’s. At one point she had more fan mail than Greta Garbo.

Not only am I old-fashioned in my movie tastes, but I am also pretty passe as a movie fan.

You may be thinking, “Who does that anymore?” A surprising amount do continue to write to stars like Debbie Reynolds, Tony Curtis and Elizabeth Taylor. No one writes the stars of today, though, like Angelina Jolie, Orlando Bloom or Jennifer Aniston. Why is this? Because they won’t answer…that is if you can even find an address to write to.

I get my fan mail addresses from an autograph database called StarTiger.com. On the website you can search virtually any movie star, singer or sports player. Each star has their own profile page. On this page there is a list of addresses that you can contact them.