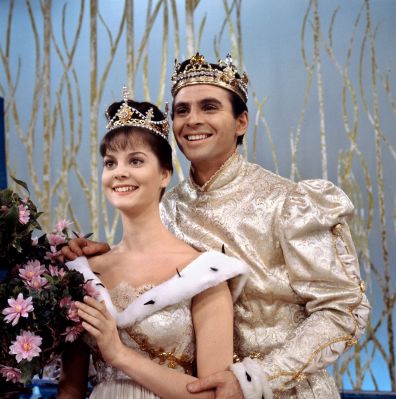 Plot:
Set to music by Richard Rodgers and Oscar Hammerstein II, the story focuses on Cinderella (Warren), a lonely young woman whose father has died and she lives only with her stepmother (Fleet) and stepsisters (Ruick, Carroll). Her stepmother and stepsisters have made Cinderella their servant, while Cinderella dreams of a better life. The Prince (Damon) is in search of a wife, and the King and Queen (Pidgeon, Rogers) hold a ball so he can find a wife. Cinderella’s fairy godmother (Holm) helps her get to the ball, but she must leave by midnight.

END_OF_DOCUMENT_TOKEN_TO_BE_REPLACED 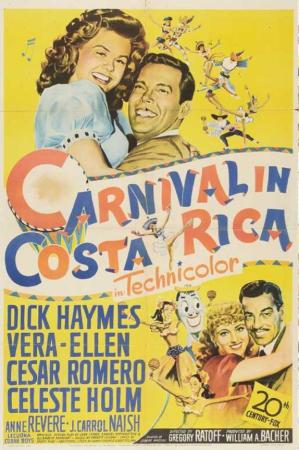 Plot:
The fathers of Luisa Molina (Vera-Ellen) and Pepe Castro (Romero) have arranged that the two will marry when they return home to Costa Rica from school in the United States. The problem is that Pepe is already in love with American Celeste (Holm), who has returned home with him. And during the carnival, Luisa meets and falls in love with American Jeff Stephens (Haymes).

END_OF_DOCUMENT_TOKEN_TO_BE_REPLACED

What do I have in common with two Academy Award winning actresses, Celeste Holm and Gloria Graham?

The three of us have all played Ado Annie in the musical “Oklahoma.” 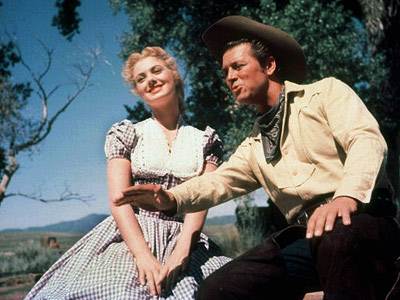 I open tonight and will perform the role this weekend and next weekend at the Kings Mountain Little Theater in North Carolina.

Though I love films, I’ve never considered being an actor. But my love for musicals is what brought me to the stage.

Last summer while I was working and living in Elkin, NC, the local theater group began holding auditions for “Annie Get Your Gun.” I felt ridiculous trying out, since I had never performed in a play before, but visions of Betty Hutton singing in the movie version of the musical drove me to try out.

Similarly, the same visions struck me this winter when I found out auditions were being held for “Oklahoma,” but these included Shirley Jones, Gordon MacRea, Gloria Grahame and Gene Nelson.

“Oklahoma” originated on Broadway in 1943 with actress Holm as Ado Annie. Holm tried out for the role so she could do her part during World War II.

“There was a need for entertainers in Army camps and hospitals,” Holm said. “The only way you could do that was if you were singing in something.”

Holm later went on to Hollywood to star with Bette Davis in “All About Eve” (1950) and won an Academy Award for Best Supporting Actress for the film “Gentlemen’s Agreement” (1947). 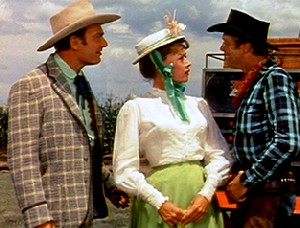 When “Oklahoma” was made into a film in 1955, sexy actress Gloria Grahame was cast as Ado Annie. But Grahame wasn’t the first pick for the role.

Grahame won an Academy Award for Best Supporting Actress for “The Bad and the Beautiful” (1952).

Betty Hutton, who was Annie Oakley in the film “Annie Get You Gun,” was approached to play “the girl who cain’t say no” but she declined.

She turned down “Oklahoma” to do the TV spectacular “Satins and Spurs,” which flopped. She later regretted turning down the role when she saw Rogers and Hammerstein were personally overseeing the film.

Hutton would have been perfect for the comedic role in the “Oklahoma” and I think it would have jumpstarted her failing career.

The trouble with Grahame is that she was constantly trying to make the role too sexy rather than cute and funny, according to IMDB. To remedy this, two comedic dancing girls were added to the film.

Grahame was also very tone deaf so her music had to be edited together, according to IMDB.

Sadly, the movie “Oklahoma” also wasn’t filmed in the state of Oklahoma but in Arizona.

Me as Ado Annie in “Oklahoma”

Though this is my second play, I don’t think the play bug has bit me. I simply do it because of my love of classic films.

What have classic films driven you to do in your daily life?

The heavens gained several stars this year as classic film stars passed away in 2012.

Since Comet Over Hollywood did not give several of them the full attention they deserved, the first few days of 2013 will be dedicated to some of the notable celebrities who left us. 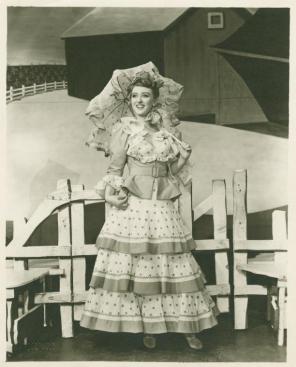 She was the first one who couldn’t say no to kisses from men in the Oklahoma Territory.

She auditioned so she could do her part during World War II.

“There was a need for entertainers in Army camps and hospitals,” Holm was quoted in a USA Today article. “The only way you could do that was if you were singing in something.”

Holm didn’t have the typical Hollywood look when she signed on with 20th Century Fox in 1946. But Holm made her mark in films.

One of Holm’s first films in Hollywood won her an Oscar for Best Supporting Actress in 1947’s “Gentleman’s Agreement;” a film about anti-Semitism in America.

She was nominated for her role as a nun with Loretta Young in “Come To The Stable” (1949) and also starred in the psychiatric drama with Olivia de Havilland, “The Snake Pit.”

But Holm’s biggest role was in between Bette Davis and Anne Baxter in “All About Eve” (1950). Her role as Karen won her another Oscar nomination but it didn’t win her Davis’s friendship.

“I walked onto the set and there’s Bette and I say, ‘Good Morning,’ and she said, ‘Oh, shit, good manners,’” Holm said. “I felt as if I’d been hit in the face with a wet flounder and I never spoke to her again. She called me a ‘Bitch,’ okay.”

Holm was cast in the musical remake of “The Philadelphia Story,” “High Society” with Bing Crosby, Frank Sinatra and Grace Kelly, who became engaged to Prince Rainier of Monaco during the filming.

Holm remembers Kelly’s ring being as “big as a skating rink,” according to the book Grace: The Secret Lives of a Princess by James Spada.

When people marveled over the ring, Holm said Kelly would reply, “It is, sweet isn’t it?”

Anne Baxter and Celeste Holm in “All About Eve” (1950). Photo from LIFE magazine

While Holm’s film career dwindled in the 1960s, she turned to acting on television and charity work; advocating organizations such as National Mental Health Association, National Council on the Arts and UNICEF.

Since the early 2000s, Holm’s health began to decline, and she began to suffer from memory loss in 2002.

Holm passed away on July 15, 2012, at the age of 95 from a heart attack. Her family asked for memorial donations to be made to some of her favorite charities, according to her USA Today obituary.

Now, from January to March, I hope to honor Holm’s memory as I perform a role she originated. I’ll be acting as Ado Annie in a local performance of “Oklahoma.” I hope I make her proud as I recreate the man-crazy role.