END_OF_DOCUMENT_TOKEN_TO_BE_REPLACED

Plot:
-Heiress Doris Worthington (Lombard) is on a yatch trip with her friends (Erroll, Merman) and two princes who want to marry her (Milland, Henry). However, Doris keeps going between making eyes at and arguing with singing sailor Stephen Jones (Crosby). An accident causes the yacht to sink, and Jones ends up with Doris and her helpless, wealthy friends on an uninhabited island. None of them are used to working and Jones is the only one with survival skills. He soon has everyone except Doris working. Also on the island are husband and wife explorers (Burns, Allen).

Carole Lombard and Bing Crosby in “We’re Not Dressing”

Trivia:
-The song “The Animal in Me” was performed by Ethel Merman but was cut from the film. It was later used instead in “The Big Broadcast of 1936” (1935). Merman’s song “He Reminds Me Of You” was also cut from the film.
-Based on a 1902 play, “The Admirable Crichton.”
-Filmed on Santana Catalina Island.

Highlights:
-During the credits, the waves are used as a transition. 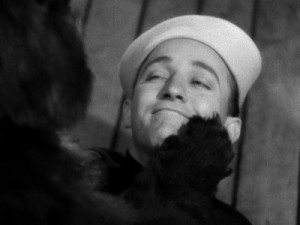 My Review:
If you’re looking for a film complete with a shipwreck and dancing bear who swoons for Bing Crosby’s crooning, this is your movie.
“We’re Not Dressing” is odd, off-beat and mildly irritating at times. But for me- none of that is really a commentary on any of the stars. Except maybe for Leon Errol. He always annoys me.
Lombard and her gaggle of socialites are sailing on the Pacific ocean. We are never told what their destination was supposed to be, but I don’t think that is actually important in the script. I think the fact that they were aimlessly sailing in a yacht with two princes was just to emphasize spoiled Lombard’s wealth.

Lombard and her two princes- Ray Milland and Jay Henry.

Also to reiterate the wealth is her pet bear named Droopy. Droopy loves when Bing Crosby sings. At one point Droopy the Bear even roller-skates around the boat.
The boat crashes when drunken Leon Errol attempts to steer the boat, causing it to capsize.
Once on the island, Lombard is angry because Crosby won’t act as a servant to her, even though she fired him while they were on the boat. Predictably, Lombard ends up falling in love with Crosby.
Bing Crosby’s character is probably the only sane person in the bunch. He also gives the best performance. But you better love Crosby’s crooning if you watch this film, because he sings roughly seven songs in this 74 minute film.
Carole Lombard is beautiful and her comedy isn’t overwhelming (I love My Man Godfrey, but I feel like I have to catch my breath at the end). Her character is very huffy though, so that was a bit annoying.
Ethel Merman was wasted, singing only two songs, and so were Gracie Allen and George Burns. For me, Allen and Burns were the true bright spot of this movie.
With a cast boasting so many big names, I think the real issue here is the goofy story line.
I won’t say I didn’t like “We’re Not Dressing,” it just sort of left me feeling scattered and scratching my head at the end, wondering what I just watched.

Plot:
Set in 1951 during the Truman-era, socialite Sally Adams (Merman) heads to the fictional European country of Lichtenburg as a United States of America ambassador. Adams’ assistant Kenneth Gibson (O’Connor) falls in love with Princess Maria (Ellen) and Adams falls in love with General Cosmo Constantine (Sanders).
Based on the Broadway play with music by Irving Berlin.

Trivia:
-Film adaptation of the 1950 Broadway play that also starred Ethel Merman. The show opened Oct. 12, 1950, and ran for 644 performances through May 3, 1952. Merman won a Tony for her performance on stage.
-Sally Adams is based on based on Washington, D.C. hostess and Democratic Party fundraiser Perle Mesta. Mesta was selected by Harry Truman to be the American ambassador to Luxembourg. The musical is a satire of the behavior of gauche Americans abroad, according to Hollywood Musicals Year by Year by Stanley Green.
-Carol Richards dubbed Vera-Ellen’s singing voice.
-20th Century Fox studio head Darryl F. Zanuck was making “Call Me Madam” and “Gentlemen Prefer Blondes” at the same time. Zannuck noted in his memoirs “Madam” was a better film but “Blondes” would make more. Blondes did double the gross of Madam, Memo from Darryl F. Zanuck: The Golden Years at Twentieth Century-Fox edited by Rudy Behlmer

My Review:
A little bit of Ethel Merman can go a long way, but you can’t deny this is her best film role.
The film was taken from a successful Broadway show that also starred Merman, “Call Me Madam” is colorful and has an excellent cast.
Merman originated several musical roles on stage such as “Annie Get Your Gun,” “Panama Hattie,” “DuBarry was a Lady” and “Gypsy.” However, when the shows went from stage to film, Merman’s role was always recast with a younger, sexier star. However, film audiences get to see Merman in a role she originated on film with “Call Me Madam.” Though to me, her singing voice can be overwhelming, you can tell Merman’s appeal on stage with the energy and humor she shows in the film role.
Also in the film, I would say Donald O’Connor steals the show. He sings and dances beautifully and has the opportunity to sing a duet with Merman. Vera-Ellen also dances beautifully, but her performance is lessened by the terrible accent she has to speak.
George Sanders is a surprise in the musical with his beautiful singing voice.
Though “Call Me Madam” isn’t my favorite musical, its energetic, funny and fun. The Irving Berlin songs are entertaining, the costumes are beautiful and the talent is excellent.