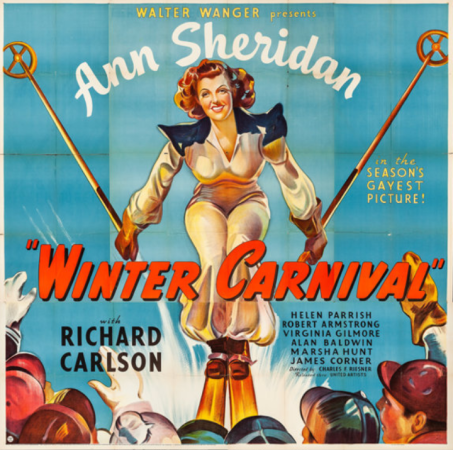 Plot:
After a well-publicized divorce to Count Olaf Von Lundborg (Lowry), Jill Baxter (Sheridan) visits Dartmouth College during its Winter Carnival. Upon her return, she finds her old boyfriend, John Wilden (Carlson), who is now a professor at the school and was jilted by Jill when she was crowned queen of the Winter Carnival years earlier. Jill’s younger sister Ann (Parrish) is also attending the carnival and falls for the head of the ski team, Mickey Allen (Corner), but as she receives attention from the other athletes, it looks like Ann may follow in Jill’s footsteps.

END_OF_DOCUMENT_TOKEN_TO_BE_REPLACED

Plot:
Music Professor Donald Hardwick teaches at Winfield College and is opposed to swing and jazz music. Donald travels to New York to publish a symphony and stays with his Aunt Martha (Broderick), who is the black sheep of the family because she married a jazz saxophone player. Donald falls out of favor with his dean (Hobbes) when he’s tricked by lyricist Linda McKay (Page) and singer Zelda Manion (Sheridan) to write swing music.

END_OF_DOCUMENT_TOKEN_TO_BE_REPLACED 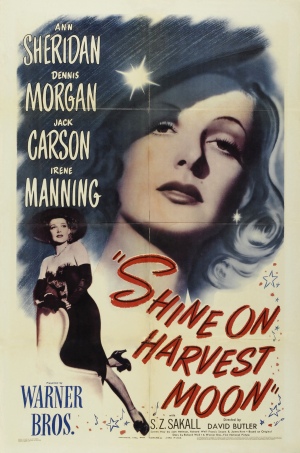 Plot:
Set in the early 1900s, this fictional biographical film follows vaudeville and Broadway stars Nora Bayes (Sheridan) and Jack Norworth (Morgan). As the couple rises to the top, they are blackballed by an old show business enemy who buys all theater chains.

END_OF_DOCUMENT_TOKEN_TO_BE_REPLACED 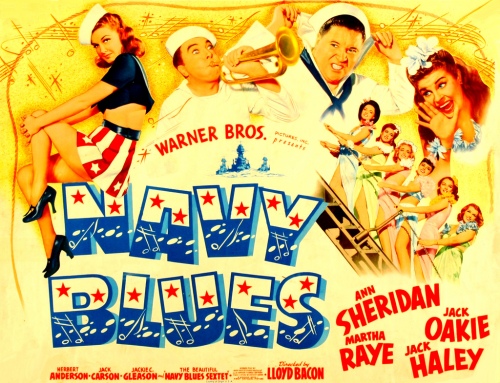 Plot:
Cake and Powerhouse (Oakie, Haley) are two Navy seamen on leave in Hawaii and are trying to borrow money to pay their way for fun. They meet prize gunner Homer Matthews (Anderson), who is being transferred to their ship. Their meeting with Matthews sparks an idea to earn more money. They want to enter Homer into the gunner competition to win the trophy for their trip and start taking bets on his abilities with the rest of their shipmates. The only problem is Homer will only be on their ship for a few days before he is discharged from the Navy, leaving before the gunnery competition. Cake and Powerhouse now work to keep Homer from leaving the Navy, but Homer is eager to return to his pig farm in Iowa. They enlist the help of night club performers Marge (Sheridan) and Lilibelle (Martha.) 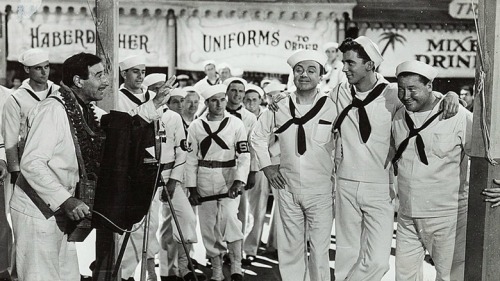 Trivia:
-The first musical comedy to come from Warner Brothers in four years, according to a January 1941 column by Louella Parsons.
-Eddie Albert was orignally slated for the film, according to the January 1941 Parsons article.
-Intro: “Honolulu where Aloha means goodbye and Shore Leave means trouble.”
-Jackie Gleason’s film debut. 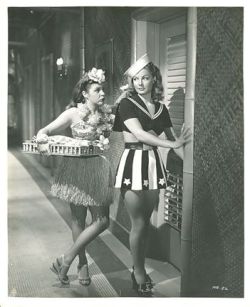 Martha Raye and Ann Sheridan at the beginning of “Navy Blues.” Unfortunately, neither has enough screen time for my liking.

My Review:
The New York Times review, published on Sept. 21, 1941, hit the nail on the head in their review saying, “Oakie and Haley working harder for laughs than a bum vaudeville team in Omaha” and that the script is full of corn.
When I watched this movie looking for an Ann Sheridan vehicle. Sheridan was in a few musicals and I love to hear her deep singing voice. However, if you are looking for a film with a lot of Ann time, don’t look to “Navy Blues.”
The film opens with Sheridan singing “Navy Blues,” looking beautiful in an adorable sailor style costume…but the film goes downhill from there.
The film is centered around the crazy, frantic antics of Jack Haley and Jack Oakie as they do con their friends and will do anything to earn a buck. Our leading ladies Ann Sheridan and Martha Raye have very little screen time in this hour and 48 minute movie.
The antics revolve around getting Herb Anderson’s character to stay in the Navy. One of the biggest highlights of this film for me was seeing Anderson (or Dennis the Menace’s dad, as my family frequently calls him) in a larger role. Before his TV dad fame, Anderson was a film character actor. His character actor roles were usually smaller than other character actors such as James Gleason or William Frawley.
We even have the opportunity to hear Anderson sing. He’s just always someone I enjoy seeing on screen. His demeanor and turtle-like look makes me smile. 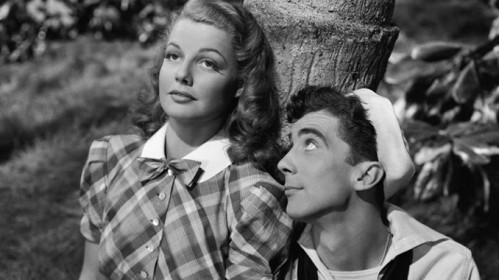 It was also a great surprise to see lovely Georgia Carroll appear in this film, singing as one of the Navy Blues Sextette Members. Carroll was the singer for band leader Kay Kyser’s band and the two later married. I believe I even shouted “That’s Georgia Carroll!” when she appeared on screen.
“Navy Blues” isn’t the worst musical I have ever seen, it’s simply that Oakie and Haley’s corn got tiresome when all I wanted was to see more Ann Sheridan.

This is the twenty-seventh  installment of the monthly classic actress beauty tips that I have read about and tested. 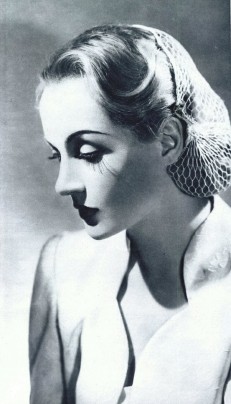 The clothing, the makeup and the hairstyles all leave me drooling. One of my favorite 1940s fashion styles that I see in the movies is the “snood.”

A snood is head scarf, usually netted in the 1940s, that fits almost like a hood. Hair is fitted inside a sort of a sack that sits on the back of the head.

Snoods were worn in the Middle Ages, 1860s and were again reintroduced during World War II, not only for fashion but to keep hair from getting caught in machinery while doing war work. 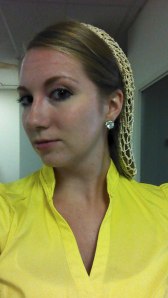 The first time I wore my snood.

As my hair has been getting longer, I was trying to figure out different ways to style it and keep it out of my face, so I decided to bring my classic film tastes and love for 1940s fashion into my life and bought a snood.

While some snoods tie, mine is elastic.

To wear it, I brushed my hair back away from my face, pinned it in place behind my ears with two bobby pins on each side, and put my hair inside the snood. I set the snood about half way back on my head.

While I was worried about looking like a lunch lady with a hair net, I’ve gotten several compliments on the snood and only a few from friends, jokingly saying I look like a sheep herder.

To review: I love wearing my snood and it successfully keeps my hair out of my face while giving me both a modern, yet vintage look. The one I bought was only $5 on ebay, but I plan to buy more decorative snoods in the future.

Here are some other classic actresses sporting the snood look: 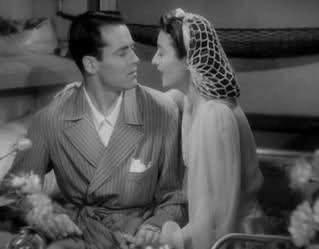 Barbara Stanwyck with Henry Fonda in “The Lady Eve” (1941) wearing a snood. 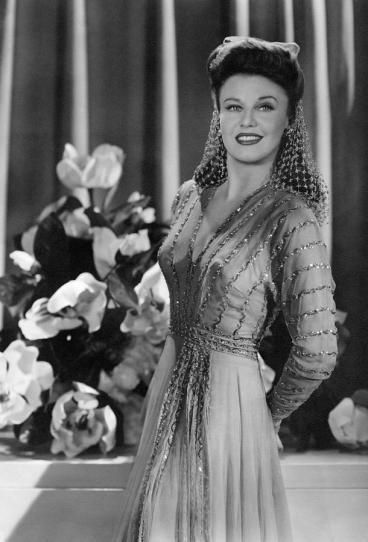 Ginger Rogers in “The Major and the Minor” with a snood. 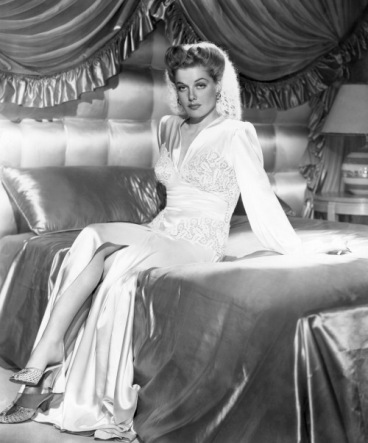 Ann Sheridan in “Thank Your Lucky Stars” (1943) with a snood

Stop by back in January for another classic actress beauty tip.